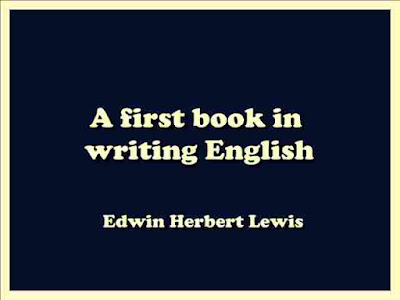 From Introduction:
It sometimes happens that the study of the principles of composition is left until the overcrowded last year of the high school, under the plea that facts ought to precede generalizations. Is it not better to have the pupil begin two or three years earlier than this to frame simple generalizations for his own future guidance?
The first-year student daily awakes to new experiences and problems. He demands rules and reasons: '• How shall he choose theme topics? How much shall he put into a sentence? Why is electrocution in bad usage? "
The complex process wherein invention, ^ as it proceeds, is rectified by criticism, involves many delicate reflexes. The formulated principle, invaluable to the student in revising, in turn, grows to be an unconscious factor in every succeeding act of composition.
The more essential rules ought not to be mere phantoms to the boy just completing his first year  in secondary school. In regard to other matters of living, great principles are taught to him from infancy, without the slightest fear of setting up too analytic a state of mind. If a boy of three may be told "always to do one thing at a time,"' must a boy be eighteen before he is told, "always to write about one thing at a time"?
At three the child is required to control some of his strongest emotions; must he be eighteen before he is asked to check digressions in the paragraph? And is it possible to implant a genuine habit of checking digressions except by leading the student from particular instances to some generalization which he may keep in mind as a norm for future self-criticism? Synthesis and analysis cannot safely be separated; a good prescription for most rhetorical disorders is, more of both. Indeed, what seems to be needed today in teaching composition is not one thing, but several:
The remarkable strength of the verbal memory in students of the first two years of secondary school is a fact by which every teacher must have been impressed.^ Add to this fact ' the other, that the pupil's social interests are now in a perfect renaissance of liveliness, and you have exactly the conditions for enlarging the working vocabulary. It is now or never. The boy, though like the man he hates a fine distinction in conversation, is grow- ing out of the exaggerated reticence wliich has of late seemed to him the manly thing. He is no longer determined to employ what Mrs Meynell, speaking of the boy of twelve, calls his "carefully shortened vocabulary."
Our plan provides for a good many short compositions. These, as well as all other exercises, should be written on uniform theme-paper,^ say eight inches by ten, with a broad margin at both sides. There are advantages to the double margin. First, it is easier for the reader of the theme to jot down his suggestions at the right since he need not turn the paper to do so. Secondly, it is well for the student to learn the knack of keeping a straight edge at the left hand. Only one side of the paper should be written on. If a mistake is made, a heavy line may be drawn through the word.
The manuscript ought to present the neat- est possible appearance. Blank spaces are to be avoided at the end of lines, except where a paragraph ends. The straight edge, referred to above, is to be scrupulously preserved at the left of the page, except that when a new paragraph (that is, division of the theme) is to begin, the first line of it should start about two inches farther to the right than the other lines.