The ego and its place in the world 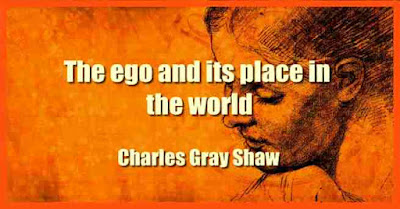 The aim of this work is at once personal and professional; its pages contain the author's retort to the world, as well as his idea of the manner in which that world is to be analysed.
The analysis of the world into appearance, activity, and reality may be taken as indicative of the author's desire to come to an understanding with the forms, the forces, and the ends of the world without and within, while the conclusion to each of the three books should stand for an attempt to construe the phenomenal world as the place of joy, the causal world as the place of work, the substantial world as the place of truth. In the elaboration of this threefold world, in which three great human interests are vested, it has been found expedient to interpret phenomenality in the light of aesthetics, causality by means of ethics, substantiality after the manner of religion.
In these brisk times of Pragmatism and Realism, it is not unheard of for a dialectical discoverer to return from his voyage with the report that at last the poles of being have been found; the following work must be taken to indicate no more than the writer's '' farthest north." Viewed from the academic standpoint, the following analysis of reality will be found to contain a discussion of the traditional metaphysical problems whose forms, indicated by Parmenides and Aristotle, by Descartes and Kant, have recently been endowed by art and science, ethics and religion, with new content.
The study of these problems has been carried on with the conviction that the time has come for philosophy to pause in its investigation and analysis, and seek to effect a higher synthesis of that which has been acquired. The various chapters making up the body of the work have served their purpose in a course of lectures in Metaphysics at New York University; the book attempts to put the material in a more permanent form.

INTRODUCTION
I. The Restatement of Reality— 2. The Activistic View— 3. The
— Problem of the Ego — 4. The Metaphysical Motives — 5. Dialectics as Knowledge and Culture i
BOOK I
The World of Appearance
The Preliminary View of Being
I. REALITY AS FOUND IN APPEARANCE
I. The Attitude toward Appearance — 2. The Reception of the Real through Appearance — 3. Experience and the Ego;— 4. The Reaction upon Experience 29
11. THE ESSENCE OF THINGHOOD IN ORDER
I. The Fallacy of Mere Thinghood — 2. A Thing and its
Qualities — 3. The Perception of Reality as Order — 4. The Realisation of Appearance — 5. Actuality as Active Principle — 6. Thejnner Realisation of Existence 53
III. APPEARANCE AND SPATIALITY
I. Spatiality and Phenomenality — 2. The Perception of Space— 3. Space as Intuition — 4. Spatiality and Reality — 5. The Ideality of Space — 6. Spatiality and Selfhood .... 75
IV. OUTER WORLD AND INNER LIFE
I. Stimulus and Sensation — 2. Parallelism and Phenomenality —
3. Monism and Intellectualism — 4. Consciousness and Culture — 5. Selfhood and Soul- Stuff— 6. The Inner Enjoyment of Existence 98
V. THE SELF AS CONSCIOUSNESS
I. The Inness of Consciousness — 2. Consciousness and Soul-
States — 3. The Self as Anti-Social — 4. Self-Scepticism — 5. Consciousness in Nature and Culture . . . .121
VI. THE PLACE OF THE EGO IN THE WORLD OF SENSE
I. The Solipsistic Scruple — 2. Selfhood in Sense — 3. Individuality
and Irrationality — 4. The Assertion of Selfhood — 5. The Inner World of Selfhood — 6. Appearance and Intuition — 7. The World as Place of Enjoyment 144
BOOK II
The World of Activity
The Intermediate View of Being
I. THE UNITY OF THE REAL AND PHENOMENAL IN ACTIVITY
I. The Real as Cause of the Phenomenal — 2. Appearance and
Activity — 3. The Causal as Phenomenal — 4. The Causal as Substantial — 5. The Unity of Theoretical and Practical . . 175
VI. THE SELF-ACTIVITY OF THE EGO
I. The Reaction of the Self upon Nature— 2. The Self as Will—
3. Conation and Consciousness — 4. The Ego as Will to Self-hood— 5. Freedom of the Self 292
'VII. THE WORK OF THE EGO IN THE WORLD OF ACTIVITY
I. The Dread of Egoism — 2. The Supremacy of Selfhood — 3. The Work of the Self— 4. The Positive Form of Self-Activism
—5. The World- Work of the Ego— 6. Work and Worth. 317
the book details : Download 22.8 MB