The duality of truth 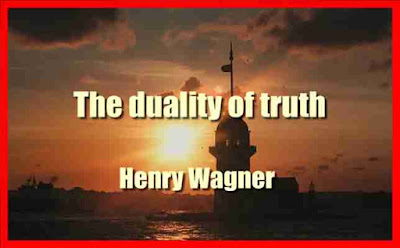 In presenting this brief review of the Occult Forces of Nature a few words are thought necessary to make clear to the reader the idea of the writer for this statement of Hermetic Philosophy. The Kab- alist and the Astrologer, as well as the Alchemist, in writing upon Hermetic Philosophy, have veiled, rather than revealed, its true meaning under symbols and hieroglyphics that make it almost impossible for the general reader to understand their writings.
The reasons that compelled them to veil Truth having passed away, with the past Cycle, from which the Earth and its inhabitants of the Western Continent are now emerging out of the mental darkness that shrouded the past cycle of humanity in the mental night. Therefore, I am persuaded the time has come to partially lift the veil and speak in plain and simple language that all may understand.
Therefore, the reader will excuse the repetition of expression, as it was found necessary to make clear the ideas the author wishes to express. Nature is forever one, as a whole, but infinite in expression; therefore I have only copied Nature in my attempt to make clear her operations as viewed from the standpoint of a student of Hermetic Philosophy. Hermetic means secret or sealed and, in opening the seal of One Law dually expressed,
I have revealed Isis and Osiris as the Motherhood and Fatherhood of God; two expressions of Force and Intelligence, emanating from one fountain of life as Positive and Negative — Darkness and Light, Time and Eternity, Electricity and Magnetism, Motion and Rest, Reason and Intuition, Mind and Spirit, Subjective and Objective, Duality and Unity, Physical and Metaphysical, Spirit and Matter, God and Nature, Ignorance and Wisdom, Ideal and Real, Human and Divine, God and Devil, Philosophy and Religion, Analysis and Synthesis, Involution and Evolution. Thus we see Life is dually expressed, ad infinitum.
The Kingdom of God can never come until "The two become as one." "Let him who can receive it, so receive it." This is a great mystery that has been hidden for ages and from generations. " He that hath an ear, let him hear."
The spiritual Christ comes to seek and to save that which is lost, it does not say man which is lost, but that which is lost, and to restore to a man that Spiritual Intuition which he lost when his dual forces became sundered and he grew into the animal objective world of sense and selfishness. In the Books of Moses, we read, "God, in the manifestation of two opposites in force, created the two heavens, i. e., the upper or light, and the lower or dark, signifying the equivalents of heat and cold, day and night, expansion and contraction, summer and winter
In short, the all-embracing cosmic relations. In-volution and evolution of the two halves, or male and female principles within the man and woman, give them their new birth, the growth of which leads to spiritual life and wisdom, restored to their former original oneness as a Deific Ego, expressing its dual nature outwardly in the forms of man and woman.
This dual expression of the Father and Mother God in man and woman, is God manifested in his offspring. Therefore, we are Godlings in embryo in the womb of Nature called Isis, the mother of all, and when developed into our fullness of growth we become the perfect Man-God or Christ.
This knowledge is God's eternal truth to his children of Earth and will redeem them unto Himself as they accept it and make it their own, each one for himself or herself. There is no Vicarious Atonement. The Christ within must redeem from ignorance, which is a sin against the Father and Mother of our being.
Therefore, to remain in sin or ignorance, or mental darkness of who. God is and who we are, and our relation to Him, is to grieve the Holy Spirit as He would that all should know Him from the least unto the greatest. If this volume aids to this end its aim and object will have been accomplished. Therefore, no more need be said to introduce this book to my readers. The Author.
the book details : Download 10.6 MB