The animal mind; a textbook of comparative psychology 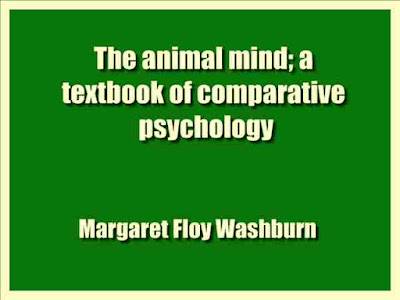 The title of this book might more appropriately, if not \ more concisely, have been "The Animal Mind as Deduced j from Experimental Evidence." The facts set forth in the following pages are very largely the results of the experimental method in comparative psychology.
Thus many aspects of the animal mind, to the investigation of which experiment either has not yet been applied or is per- haps not adapted, are left wholly unconsidered. This limitation of the scope of the book is a consequence of its aim to supply what I have felt to be a chief need of comparative psychology at the present time.
Although the science is still in its formative stage, the mass of experimental material that has been accumulating from the researches of physiologists and psychologists is already great, and is also for the most part inaccessible to the ordinary student, being widely scattered and to a considerable extent published in journals which the average college library does not contain.
While we have books on animal instincts and on the inter- pretation of animal behaviour, we have no book which adequately presents the simple facts. Probably no bibliography seems to one who carefully examines it entirely consistent in what it includes and what it excludes.
Certainly, the one upon which this book is based contains inconsistencies. The design has been to exclude works bearing only upon general physiology, upon the morphology of the nervous system and sense organs, or upon the nature of animal instinct as such, and to include those which bear upon the topics mentioned in the chapter headings. Within these limits, the collection of references upon to the First Edition no topic is as full as would be necessary for the bibliography of special research upon that topic. Doubtless, there are omissions for which no excuse can be found.
In one or two cases, where the literature upon a single point is very large, as for example, in the case of the function of the semicircular canals, only a few of the more important references have been given. One further comment may be made. The book deals with comparative rather than with genetic psychology. I gratefully acknowledge help from a number of sources.
To Professor Titchener I owe, not only my share of that genuine psychological spirit which he so successfully imparts to his pupils according to their ability but various helpful criticisms upon the present work, about half of which he has read in manuscript. Dr Yerkes has given me much invaluable aid in securing access to material, and has very kindly permitted me to see the proofs of his book on "The Dancing Mouse."
As editor of the series, he has reviewed my manuscript to its great advantage. Professors Georges Bonn and George H. Parker have shown special courtesy in making their work accessible to me. Professor Jennings has kindly allowed the use of a number of illustrations from his book on "The Behavior of the Lower Organisms."
My colleague Professor Aaron L. Tread well has generously helped me in ways too numerous to specify. But perhaps my heaviest single obligation is to Professor I. Madison Bentley, who has read the manuscript of the entire book, and whose advice and criticism have been of the utmost benefit to every part of it.
the book details : Download