A first course in the differential and integral calculus 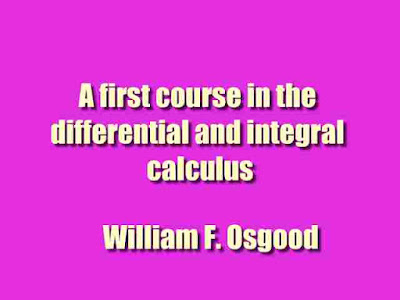 From introduction:
The treatment of the calculus that here follows is based on the courses which I have given in this subject in Harvard College for a number of years and corresponds in its main outlines to the course as given by Professor B. 0. Peirce in the early eighties. The introduction of the integral as the limit of a sum at an early stage is due to Professor Byerly, who made this important change more than a dozen years ago. Professor Byerly, moreover, was a pioneer in this country in teaching calculus by means of problems, his work in this direction dating from the seventies.
The chief characteristics of the treatment are the close touch between the calculus and those problems of physics, including geometry, to which it owed its origin; and the simplicity and directness with which the principles of the calculus are set forth. It is important that the formal side of calculus should be thoroughly taught in a first course, and great stress has been laid on this site. But nowhere do the ideas that underlie calculus come out more clearly than in its applications to curve tracing and the study of curves and surfaces, indefinite integrals with their varied applications to physics and geometry, and in mechanics.
For this reason, these subjects have been taken up at an early stage and illustrated by many examples not usually found in American textbooks.* It is exceedingly difficult to cover in a first course in calculus all the subjects that claim a place there. Some teachers will wish to see a fuller treatment of the geometry of special *Professor Campbell's book: The Elements of the Differential and Integral Calculus, Macmillan, 1904, in its excellent treatment of the integral as the limit of a sign, is a notable exception. curves than I have found room for. But I beg to call attention to the importance of the subject of functions of several variables and the elements of the geometry of surfaces and twisted curves for all students of the calculus.
This subject ought not to be set completely aside, to be taken up in the second course in calculus, to which, unfortunately, too few of those who take the first course proceed. Only a slight knowledge of partial differentiation is here necessary.