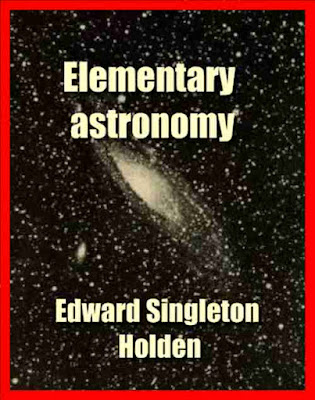 From the introduction:
The first notions of Astronomy are acquired in the study of Geography. Geography lays special stress on the fact that the surface of the Earth is in a state of constant change. Its oceans and its atmosphere are subject to tides; its surface is levelled for the sites of cities and towns; its mines and quarries are explored for substances useful to mankind.
Men navigate its seas and use its soils to produce the food that supports them. Its ceaseless changes, natural and artificial, give to it a kind of life for the sign of life changes. Geography teaches, also, that the Earth is one of the planets, but in this larger relation says little or nothing of changes taking place in the solar system.
The young student is very apt to conclude that the other planets of whose existence he knows Venus and Jupiter for example are changeless, immutable; that they are bright points of light without a history. This was the view of the ancients.
The special business of Astronomy is to develop the ideas of the student so that he may understand that all the bodies of the Solar system the Sun and all the planets are themselves subject to ceaseless changes and are thus endowed with a kind of life.
Not only this; the bodies throughout the whole universe Sun and stars alike are perpetually altering both their places and the arrangement of their separate parts. Our life on the Earth, for instance, would quickly cease were it not for changes in the Sun. There are many stellar systems in which such changes have. already ceased and which are themselves now dead as the Moon is dead. Others again are in their prime of youth, and still, others are in their ripe maturity.
The Cosmos is, as it were, alive; and it is still in a state of uncompleted development. The study of Astronomy should lead the student to comprehensive ideas of the universe at large. He will gradually become possessed of at least a part of the vast body of re- results that has been slowly amassed, and, what is even more important, of the methods that have been invented by the great men of past times for the discovery of results.
A part of the lesson of science will have been missed if it does not teach a sympathetic admiration for great names like those of Galileo, Kepler, and Newton. Its history is intimately connected with the history of the intellectual development of mankind.
As Astronomy is one of the oldest of the sciences its methods have been perfected to a very high degree, and have served as models for the methods of the other sciences. It is chiefly for this reason that it is so well fitted to be the science first studied by the young student. In teaching Astronomy every endeavour should be made to have the student realize what he learns. What is already known about the Earth will serve as a stepping-stone to a knowledge of the planets.
When something is learned of the planets, the knowledge will throw light upon the past (or the future) condition of the earth. Jupiter represents, in many respects, the past condition of the Earth, just as the Moon, in all likelihood, represents its state in a very remote future.
The Sun is like the bright stars strewn by thousands over the celestial vault, not unlike them. Everything that can be learned regarding the Sun helps us to comprehend physical conditions in the stars, therefore; and the converse is true.
It is probable that most of the students who will read this book will not pursue the subject further in the way of formal studies. Their ideas of the measurement of time, of the apparent and real motions of the planets, of the cause of the seasons, and of other fundamental and practical matters of the sort, will be derived from this one course of study.
Especial stress is therefore laid on such topics, and many interesting subjects of less importance are passed by with a mere mention or are omitted altogether. The prescribed limits of space do not permit a treatment. all the parts of a vast science like Astronomy.
It may sometimes be useful to the teacher, and it will always be so to the student, to refer to the questions printed in Part I, which will suggest new ways of testing the knowledge gained by the reading of each lesson.
It is not here attempted to set down all, or any great part, of the questions which each topic may suggest, but only to give such as are most essential and important. If the student finds that he has an answer in clear and definite English for each of the questions given here, he may be sure that he has comprehended the explanations of the text. And he should not finally leave any topic until he does so.
the book details : Download Elementary astronomy 30 MB - Contains illustrations