An illustrated dictionary of words used in art and archaeology. 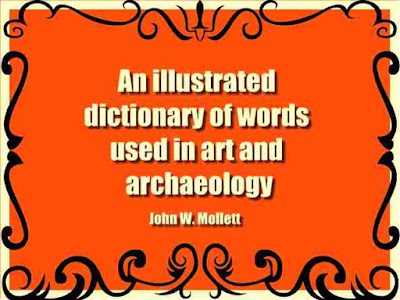 Little or nothing, however, of the text of. Bosc's work has been left standing; his definitions having, in the process of revision under reference to original works, almost entirely disappeared.
The whole work, as it now stands, has been drawn from, or carefully corrected by, the best authorities in each of its special branches. Considerable prominence has been given to Architecture, from the French original corrected from English writers; to Christian Antiquities from Martigny, and the Dictionary of Dr Smith and Professor Cheetham, and other authorities; to Medieval Armour, and terms of Chivalry, chiefly from Afeyrick's Ancient Armour; to Costume from Flange and Fairholt; to Heraldry from Boutdrs and Mi^s. Bury Palliser's works; to Pottery, the substance of the articles on this subject being derived from M. Jacquemarfs work; to Needl work, Ivories, Musical Instruments, Goldsmiths' Work, Painters' Materials and Processes Ancient and Modern, Colour, &;c., with references to the several authorities referred to.
The Greek and Roman Antiquities, which are the principal part of M. Bosc's work, have been in this volume reduced to the smallest possible compass: the Dictionaries of Dr Smith and Rich must be referred to by those who require fuller definitions upon this subject, which would of itself fill ten such books as the i)resent.
Dr. Birdwood's Handbooks have been a most useful guide. Finally, it is necessary to state, that many words essential to the completeness of the work would have been in danger of omission, if I had not had before me Mr FairhoWs admirable Dictionary of Art Terms, which, occupying a more restricted ground than this, is so thorough and accurate in dealing with all that it professes to include, that the only raison d'etre of this work is the very much wider and different ground that it covers, and the greater condensation of its definitions.
Obviously, the substance of every statement in the work is borrowed from some previous writer on the subject, and it is evident that a Dictionary of Reference is not a convenient vehicle for theory or invention.
The appended list of Classified Catalogues which have been prepared by direction of the authorities of the South Kensington Museum, will have the additional use of referring the reader to the fountain-head at which he can verify and amplify the condensed information that this work supplies.
the book details : Download 33.7 MB