Arabian society in the Middle Ages 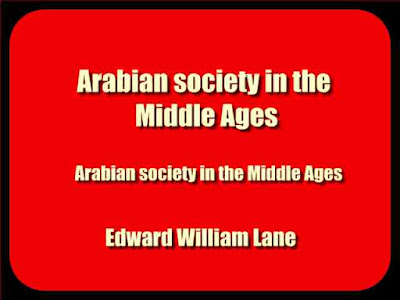 studies from The thousand and one nights

When Mr Lane translated the " Thousand and One Nights," he was not content with pro- during a mere rendering of the Arabic text: he saw that the manners and ideas there described required a commentary if they were to become intelligible to an unlearned reader. At the end of each chapter of his translation, therefore, he appended a series of explanatory notes, which often reached the proportions of elaborate essays on the main characteristics of Mohammadan life.
These notes have long been recognized by Orientalists as the most complete picture in existence of Arabian society — or rather of those Arab, Persian, or Greek, but still Mohammadan, conditions of life and boundaries of the mental horizon which are generally distinguished by the name of Arabian.
Their position and arrangement, however, scattered as they were through three large volumes, and inserted in the order required not by their subjects but by the tales they illustrated, rendered them difficult to consult, and cumbrous, if not impossible, to read consecutively.
It has often been suggested that a reprint of the principal notes, in a convenient form and in natural sequence, would be a welcome addition to the scholar's as well as to the general library.
The publication of a new impression of the "Thousand and One Nights" presented an opportunity for discussing the project, and the result is the present volume. My task, as editor, has been a simple one. I have rejected only those notes which have no value apart from the main work — glossarial notes^ for instance, giving the English of the proper names occurring in the Arabian Nights; disquisitions on the probable date of the composition of the tales; and others inseparably connected with the stories themselves.
The rest I have arranged in a series of chapters, interweaving the shorter notes in the longer, and giving as far as possible air of unity to each division. Beyond such verbal alterations, as were required by the separation of the notes from the text to which they referred, occasional changes in punctuation, and a slight alteration in the spelling of Oriental names in accordance with my great-uncle's latest method, I have not interfered with the form of the notes as they appeared in the edition of 1859.
Such insignificant changes as I have made, I think I may state with confidence, would have been approved by the author. Beyond a few notes distinguished by square brackets, a new and very minute index (in which all Arabic words are explained), and a list of the authorities quoted, I have added nothing of my own. It may be objected to the title of the book that a considerable part of the notes is composed of recollections of Mr Lane's personal experiences in Cairo in the early part of the present century. The subject matter, however, is really mediaeval.
The notes have all the same purpose: to explain the conditions of life and society as they were at the time when the " Thousand and One Nights " assumed their present collected form. Upon various grounds, Mr Lane placed this redaction or composition at about tlie ends of the fifteenth century. Accordingly, a large proportion of these notes consist of extracts from the more famous Arabic historians and other authors of the later Middle Ages, such as Ibn El-Jowzee (who died in a.d. 1256), El-Kazweenee (1283), Ibn-el-Wardee (1348), Ibn-Khaldoon (1406), El-Makreezee (1441), Es-Suyootee (1505), who all knew Arabian society in precisely the state described in the " Thousand and One Nights."
Most of these authorities were unpublished when the notes were written, and Mr Lane's quotations are from manuscripts in his own possession. Some are still unedited; and though many have been printed at the Boolak Press and elsewhere, it is surprising how little they have been used by European authors. To the records of these mediaeval writers, Mr Lane added the results of his personal experience; and in doing so he was guilty of no anachronism: for the Arabian Society in which a Saladin, a Beybars, a Barkook, and a Kait-Bey moved, and of which the native historians have preserved so full and graphic a record, survived almost unchanged to the time of Mohammad 'Alee when Mr Lane spent many years of intimate acquaintance among the people of Cairo.
The life that he saw was the same as that described by El-Makreezee and Es-Suyootee; and the purely Muslim society in which Mr Lane preferred to move was in spirit, in custom, and in all essentials the same society that once hailed a Haroon er-Rasheed, a Jaafar el-Bar- mekee, and an Aboo-Nuwas, among its members.
The continuity of Arabian social tradition was practically unbroken from almost the beginning of the Khalifate to the present century, at least in such a metropolis of Islam as Cairo, or as Damascus or Baghdad. European influence has been busy in demolishing it. Cairo has long- been trying to become a bastard Paris instead of the picturesque city of El-Mo'izz and Salah-ed- Deen, and to forget its traditions of the palmy days of Islam and its memorials of the chivalrous heroes of crusading times. It would be impossible now to gather the minute details of a purely Mohammadan society which Mr. Lane found ready to his eye and hand; and it is, therefore, the more fortunate that the record of Arabian Society, as it was during the Khalifate and under the rule of the Memlooks in the Middle Ages, and as it continued to he in Egypt to the days of Mohammad Alee, was faithfully preserved in the "Manners and Customs of the Modern Egyptians," and in the notes to the " Thousand and One Nights," which are here for the first time presented in a separate and consecutive form.
the book details : Download 10.9 MB