A dictionary of the anonymous and pseudonymous literature of Great Britain. 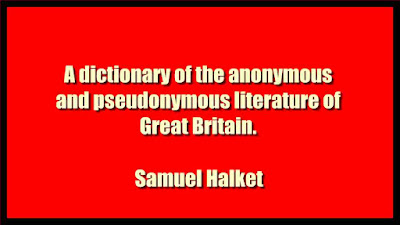 Including the works of foreigners written in, or translated into the English language

From the editor's note:
In bringing this work to a close, I feel that some explanation of the unexpected delay which has taken place in the issue of the several volumes is due to the subscribers. At the time of my father's death, eight years ago, there came into my hands an enormous mass of materials, comprising, in addition to his own collections, those of Mr Halkett and Mr H. B. Wheatley. No attempt had been made to arrange these materials.
In the process of reducing the slips to some rough alphabetical order, I discovered that a large number consisted of merely a word or two of the title, with a reference to one or more authorities. Consequently, those titles had to be completed, references verified, and not infrequently, in the case of duplicate slips drawn from different sources, rival claims of authorship examined.
Moreover, the strict rule laid down by the original projectors of the Dictionary, that no book should be considered anonymous or pseudonymous if the author's real name was made known anywhere throughout the work, imposed upon me the duty of carefully examining the books themselves in all such cases where the memoranda in my hands were defective, or where it was not clear that the books had already been so examined.
I have thus fortunately been able to add an asterisk to many entries which had previously been taken at second hand. It need hardly be said that all this involved much expenditure of time. The Edinburgh libraries which were accessible to me did not contain all the volumes I had to examine, or the bibliographical works it was necessary to consult; nor did my references always tell me where they were to be found.
I was therefore obliged to seek information from various libraries throughout the kingdom, and a single incomplete or illegible slip has sometimes caused much correspondence.
A few titles, nevertheless, will be found entered in the Dictionary on the authority of sale and booksellers' catalogues, such as Leslie's Cat. and Bliss' Cat. Some of these may not be strictly anonymous, but I have] entered them, knowing that it was my father's intention to give them a place in the Dictionary, with this explanation. Although I have taken every pain to complete this work in a manner \vorthy of those who originated and carried it on, I am deeply conscious how far I fall short of my aim; and I have to crave the indulgence of those whose superior knowledge will enable them to detect errors or omissions.
There remains for me now only the pleasant duty of acknowledging my obligations to the many librarians and bibliographers to whom I am indebted for assistance. My special thanks are due to Mr J. T. Clark, Keeper of the Advocates' Library, who, besides placing the large stores under his charge at my disposal, has, with great courtesy and kindness, be ready in every difficulty to help me with his valuable information and advice; to Mr T. G. Law of the Signet Library, Edinburgh, whose well-known acquaintance with Roman Catholic literature has been of great service; to Mr H. R. Tedder of the Athenaeum Library, London, who has kindly compared with the books all the slips which refer to the Athenaeum Catalogue; and to Dr Garnett of the British Museum, and Mr F. Madan of the Bodleian Library, with whom I have had much correspondence, and who, in the midst of their arduous duties, have, with unwearying patience, never failed to afford me the help which their wide knowledge and abundant stores of information enabled them to give.
the book details : Download 22 MB -