Remarks upon alchemy and the alchemists 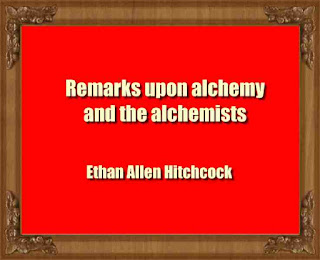 indicating a method of discovering the true nature of hermetic philosophy: and showing that the search after the philosopher's stone had not for its object the discovery of an agent for the transmutation of metals: being also an attempt to rescue from undeserved opprobrium the reputation of a class of extraordinary thinkers in past ages
From introduction:
It may seem superfluous in the author of the following remarks to disclaim the purpose of re vi vino- the study of Alchemy, or the method of teaching adopted by the Alchemists. Alchemical works stand related to moral and intellectual geography, somewhat as the skeletons of ichthyosauri and plesiosaur are related to geology.
They are skeletons of thought in past ages. It is chiefly from this point of view that the writer of the following pages submits his opinions upon Alchemy to the public. He is convinced that the character of the Alchemists, and the object of their study, have been almost universally misconceived; and as a matter of fact^ though of the past, he thinks it of sufficient importance to take a step in the right direction for developing the true nature of the studies of that extraordinary class of thinkers.
The opinion has become almost universal, that Alchemy was a " pretended science by which gold and silver were to be made by the transmutation of the baser metals into these substances, the agent of the transmutation being called the philosopher's stone."
Those who professed this Art are supposed to have been either impostors or under a delusion created by impostors and mountebanks.
This opinion has found its way into works on Science, and has been stereotyped in biographical dictionaries and in encyclopaedias, large and small; and, in general, allusions to Alchemy, in histories, romances, and novels, are of but one character, and imply that the professors of the Art were either deluders or deluded, were guilty of fraud or the victims of it. It may be a hopeless task to announce a different persuasion with the expectation of superseding this deeply rooted prejudice, but the author thinks it a duty to declare the opinion he has derived from a careful reading of many alchemical volumes, and in the following remarks he has taken for his thesis the proposition that Man was the subject of Alchemy; and that the object of the Art was the perfection,
The salvation of man — his transformation from evil to good, or his passage from a state of nature to a state of, grace — was symbolized under the figure of the transmutation of metals. Under this point of view, the works of the Alchemists may be regarded as treatises upon religious education, though they may now only serve to show past opinions upon this important subject.
The writings of the Alchemists are all symbolical, and under the words gold, silver, lead, salt, sulphur, mercury, antimony, arsenic, orpiment, sol, luna, wine, acid, alkali, and a thousand other words and expressions, infinitely varied, may be found the opinions of the several writers upon the ^.3at questions of God, nature, and man, all brought into or developed from one central point, which is Man, as the image of God.
The author is perfectly aware of the latitude of interpretation to which all symbolical writings are exposed, and that it is possible for an undisciplined imagination to make from such writings anything of anything^ and indeed to make almost anything of nothing. He needs no schooling on this subject, but feels himself, on the contrary, in a position to justify his warning the readers of all symbolical works, that they cannot be too cautious and guarded against supplying from their own imaginations and afterthoughts, interpretations to all such works.
They should hold themselves absolutely upon the immovable foundation of truth and nature, whereby alone they can save themselves from misapprehensions and from the danger of being carried entirely away from reality into mere dreams and fictions. But with the proper guards, supplied by sound theory and a knowledge of nature, it is extremely interesting, and the author thinks instructive, to interpret by- gone forms of thought, even in alchemical volumes, in which it is quite possible that many precious jewels may be found, though the philosopher's stone is missed.
the book details : Download 11.6 MB