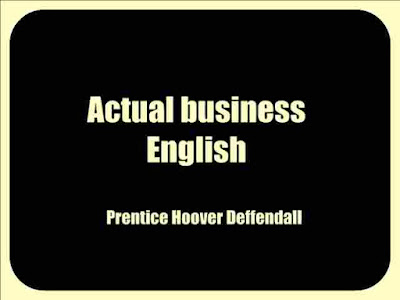 Froom the Editor Introduction:
For more than a generation, authors of textbooks on English have called their books by the title Business English. So far as I know, no one previous to Mr Deffendall has dared actually to do what is implied in the title. In Actual Business English, every illustrative sentence is taken from business; every usage recommended is a business usage; every modern detail taught is a detail necessary to business letter writing, and every antiquated de- tail ignored is a detail that the business office of today also ignores. The usual text labelled Business English begins with illustrations taken from the classics and ends with them. This book is different.
Mr Deffendall's sentences and paragraphs come hot from Wanamaker, Packard, Good- year, and others who pay men to do what Mr Deffendall is trying to train the student to do. No such sentences as "The lowing herds wind slowly o'er the lea," appear in his work. This is not because such sentences are not beautiful and correct, but because *' The growing company moved into a new building," suits Mr Deffendall's purpose better, and has a stronger appeal to enthusiastic commercial students.
That the author has actually done what his title promises, is the first thing that stands out from the pages of this book.
The second really notable thing Mr DefiFendall has done is scientifically to select and arrange the common errors of speech with the corrected forms. These errors are no mere hodge-podge of incorrect phrases presented for haphazard study.
With a careful, painstaking scholarship, the author has compiled lists of the common vulgarisms, colloquialisms, and grammatical blunders of American speech. He has used Dr Charters' Study of Pupils' Errors^ and other similar studies, besides a list of his own, gathered from years of experience as an instructor in English.
There is much that is true in the old saying that to correct a man's grammatical errors you must begin with his grandparents. If young people constantly hear the ungrammatical language at home, the teacher can do little for them. But as much as a teacher can do, the author has done in this book. He has given the most carefully selected list of such errors that has ever been compiled; he has shown the correct forms; he has when necessary, explained the reasons for these correct forms; and in all cases, he has demanded practice of the pupil and has put him to a test in an exercise at the end of the same lesson.
Moreover, he has presented each error at the exact time when in the student's progress it can best be corrected — that is, when the preceding lesson or lessons have shown the correct usage in the specific case that is being studied. Few texts present for correction so well chosen a list of habitual errors. No other text presents them in so scientific and systematic a manner. It is likely that Mr Def-endall's success in this connection is due to his realization that the number of such errors is small, as has been clearly shown by a scientific analysis of them through a period of years.
The teaching of correct English, which is the main object of the book, is preceded by a review and restatement of the essentials of grammar, in which that dread study is stripped of the complicated rules that modern instruction has shown to be unnecessary.
What is given of grammar is the part that is vital to correct English as required by the modern business office. What is omitted is the vast, complicated machinery of hair-splitting rules and their still more intricate exceptions. For the practical purposes of everyday speech, these are shown by the author to be unnecessary, for he has accomplished his purpose without them.
The art of putting correct words together in sensible sentences begins with the study of the word and then proceeds through the study of the sentence, the paragraph, and the whole composition. By a gradual process, Mr Deffendall skillfully brings the student up to the study of letter writing, leaving him prepared for definite and positive progress toward the mastery of that well-paid accomplishment. His treatment of punctuation, one mark at a time, is as simple and thorough as his handling of the problem of the correct word.