Worlds in the making 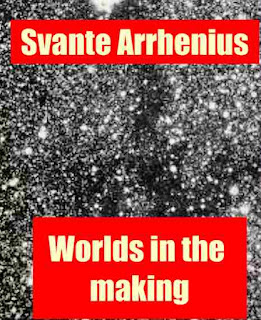 When, more than six years ago, I was writing my Treatise of Cosmic Physics, I found myself confronted with great difficulties. The views then held would not explain many phenomena, and they failed in particular in cosmogonic problems.
The radiation pressure of light, which had not, so far, been heeded, seemed to % give me the key to the elucidation of many obscure problems, and I made large use of this force in dealing with those phenomena in my treatise. The explanations which I tentatively offered could, of course, not claim to stand in all their detail; yet the scientific world received them with unusual interest and benevolence. Thus encouraged, I tried to solve more of the numerous important problems, and in the present volume, I have added some further sections to the complex of explanatory arguments concerning the evolution of the Universe.
The foundation to these explanations was laid in a memoir which I presented to the Academy of Sciences at Stockholm in 1900. The memoir was soon afterwards printed in the Physikalische Zeitschrift, and the subject was further developed in my Treatise of Cosmic Physics. It will be objected, and not without justification, that scientific theses should first be discussed and approved of incompetent circles before they are placed before the public. It cannot be denied that, if this condition were to be fulfilled, most of the suggestions on cosmogony that have been published would never have been sent to the compositors; nor do I deny that the labour spent upon their publication might have been employed for some better purpose. But several years have elapsed since my first attempts in this direction were communicated to scientists.
My suggestions have met with a favourable reception, and I have, during these years, had ample opportunity carefully to re-examine and to amend my explanations. I, therefore, feel justified in submitting my views to a larger circle of readers. The problem of the evolution of the Universe has always excited the profound interest of thinking men. And it will, without doubt, remain the most eminent among all the questions which do not have any direct, practical bearing. Different ages have arrived at different solutions to this great problem. Each of these solutions reflected the standpoint of the natural philosophers of its time.
Let me hope that the considerations which I offer will be worthy of the grand progress in physics and chemistry that has marked the close of the nineteenth and the opening of the twentieth century. Before the indestructibility of energy was understood, cosmogony merely dealt with the question of how matter could have been arranged in such a manner as to give rise to the actual worlds.
The most remarkable conception of this kind we find in Herschel's suggestion of the evolution of stellar nebulae, and in the thesis of La- place concerning the formation of the solar system out of the universal nebula. Observations more and more tend to confirm Herschel's view. The thesis of Laplace, for a long time eulogized as the flower of cosmogonic speculations, has more and more had to be modified. If we attempt, with Kant, to conceive how wonderfully organized stellar systems could originate from absolute chaos, we shall have to admit that we are attacking a problem that is insoluble in that shape. There is a contradiction in those very attempts to explain the origin of the Universe in its totality, as Stallo 1 emphasizes:
The only question to which a series of phenomena gives legitimate rise relates to their filiation and interdependence" I have, therefore, only endeavoured to show how nebulae may originate from suns and suns from nebulae; and I assume that this change has always been proceeding as it is now. The recognition of the indestructibility of energy seemed to accentuate the difficulties of the cosmogonic problems.
The theses of Mayer and of Helmholtz, on how the Sun replenishes its losses of heat, have had to be abandoned. My explanation is based upon chemical reactions in the interior of the Sun following the second law of thermodynamics. The theory of the "degradation" of energy appeared to introduce a still greater difficulty.
That theory seems to lead to the inevitable conclusion that the Universe is tending towards the state which Clausius has designated as " Wdrme Tod" (heat death) when all the energy of the Universe will uniformly be distributed through space in the shape of movements of the smallest particles. That would imply an absolutely inconceivable end of the development of the Universe. The way out of this difficulty which I propose comes to this: the energy is " de- graded" in bodies that are in the solar state, and the energy is "elevated," raised to a higher level, in bodies that are in the nebular state.
book details :  Download 13 MB PDF ebook contains illurtations