What nature is; an outline of scientific naturalism 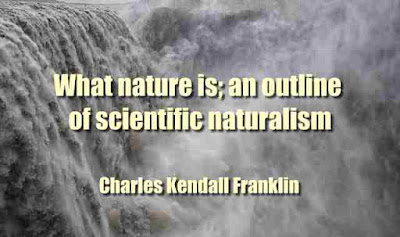 I am now convinced, that no great improvements in a lot of mankind are possible until a great change takes place in the fundamental constitution of their modes of thought. The old opinions in religion, morals and poh- tics, are so much discredited in the more intellectual minds as to have lost the greater part of their efficiency for good, while they have still had enough in them to be powerful obstacles to the growing up of any better opinions on these subjects.
When the philosophical minds of the world can no longer believe its religion, or can only believe it with modifications amounting to an essential change of its character, a transitional period commences, of weak convictions, paralyzed intellects, and growing laxity of principle, which can not terminate until a renovation has been reflected in the basis of their belief, leading to the evolution of some faith, which they can really believe: and when things are in this state, all thinking or writing which does not tend to promote such a renovation is of very Uttle value, beyond the moment. — John Stuart Mill.
An Outline of Scientific Naturalism Humanity is no longer looked at from a traditional point of view. A consensus of the scientific thought of the world places Man at the head of the animal kingdom and explains his existence by natural law. Life has existed upon the earth for millions of years. In mankind, today, it has reached conscious existence.
After arriving at maturity, and reject- ing our allegorical and symbolical theory of things inherited from the past as inadequate and insufficient, and looking about us at Nature, studying matter and energy in chemistry and physics, investigating the facts of life and mind in biology and psychology, and meditating upon the phenomena of human action and conduct in economics and sociology, we are ushered into the real mystery of things, and not to find a solution is to suffer intolerable pain at our bafflement.
Hence Man's eternal search for truth. But the life of the individual is so brief, and the historic period of humanity so short — at farthest not over ten thousand years — that, owing to lack of time for research and the accumulation of materials, the action and interaction of the elements and energies of Nature, even today, are deemed in- comprehensible to the individual, and systematic accumulations of knowledge of them form no part of the heritage of the race. Nevertheless, the necessity for a credible system of philosophy that will explain the Universe and man's relation to it to supplant our traditional theory of things is apparent to all inquiring minds. Its demand is insisted upon by the most advanced moralists of all nations.
Contents:
I. Preliminary Orientation . 1
II. The Universal Process . 4
III. Matter and Energy . . 20
IV. Idealism .... 27
V. The Processes of Nature. 33
VI. The Expenditure of Energy 45
VII. The Unity of Nature . . 50
VIII. The Law of Repetition . . 54
IX. Natural Selection . . . 61
X. Scientific Naturalism . . 68
the book details :
Download 1.3 MB