The theory and history of banking 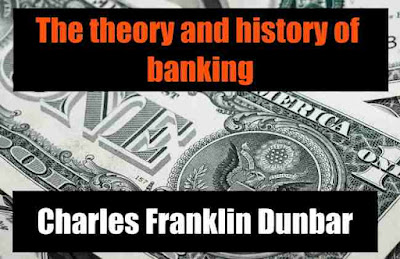 From Introduction:
The operations of banking, as the system has been developed in the last three centuries, appear at first sight to be singularly complex and difficult to comprehend.
This is not due, however, to any mystery in the operations themselves, but is the result of their multiplicity and of the varied conditions under which they take place. The wants which banks satisfy are of a simple kind, sure to arise early in the history of any commercial or industrial community in which there is mutual confidence among men; and the satisfaction of these wants is a business easily established, in what might well be regarded as an almost primitive condition of trade.
The transactions by which these wants are satisfied are, moreover, as simple as the wants themselves, and are speedily reduced to such routine as to lead Adam Smith, in a well- 2 Introductory known passage, to rate "the banking trade" as one of the few which, in his judgment, could be brought to such uniformity of method as to be safely conducted by a joint-stock company.
The leading wants to be provided for by banks are, first, loans upon a considerable scale, required by individuals embarking in enterprises beyond their own means; and, second, the temporary employment of money which is not required by the owner for immediate use, or at least the means of safely keeping it. Some agencies for lending and some place of deposit are called for as soon as commerce begins to move in a regular course.
In some countries, the task of simplifying the currency of the community, and of giving it an ascertained value, was formerly entrusted to banking institutions, but this is a service which can manifestly be more satisfactorily performed by the government and has now everywhere become one of its regular functions. Transfers of funds and arrangements for making settlements between persons in different places in the same or in different countries, i. e., domestic and foreign exchange, have always been and will remain an important field of banking activities.
The primary and indispensable functions to be provided for, however, are those of lending and of receiving on deposit, and it is these which have given rise to modem banking. These functions, it is clear, imply no very complex operations.
They require prudence, integrity, and patience, but they have no mystery. The banker who lends, or who engages to supply cash to his customer as it may be called for, needs to be sure of the solvency of his borrower and of the goodness of the security received, and must have the evidence of the transaction made indubitable, its terms clearly fixed, and the record of it complete and exact.
When he receives cash on deposit or collects for others cash which is due and holds it until it is wanted by the owners, he must in like manner be sure that the evidence of every transaction is regular and placed beyond doubt, and that its record is precise and systematic. And when, as an extension of his system of holding deposits, he recognizes the right of a depositor to transfer his deposit or any part of it to another person, in order to make a payment to the latter, the operation of transfer must be closely followed and the resulting changes in the banker's accounts must be made with fidelity and minute accuracy. But in no one of these cases does the actual transaction present any more difficult of comprehension than the simple pa3rment or receipt of money.
The questions of prudence —, how much and to whom it is advisable to lend, and upon what terms, how far it is safe to assume that deposits will be left undisturbed, and to what extent it is needful to be prepared for demands by depositors — ^require all the light that trained sagacity and experience can throw upon them, as do the questions relating to the conduct of business in other departments; but the essence of the transactions themselves, to which the judgment of the banker is applied, is simple.
This edition contains three new chapters, those on Foreign Exchange, central banks, and the Federal Reserve Banking System.
In order to avoid a very considerable increase in the size of the book, two chapters have been omitted, those on Combined Reserves and on the Bank of Amsterdam. With the establishment of the Federal Reserve banks the resort to Clearing House loan certificates, the subject matter of the chapter on Combined Reserves is now fortunately without practical significance. The economy of space has also led to the excision of many informational notes and of various historical passages, especially in the chapters on banking in France and in the United States.
the book details : Download 5.8 MB