A critical history of philosophical theories 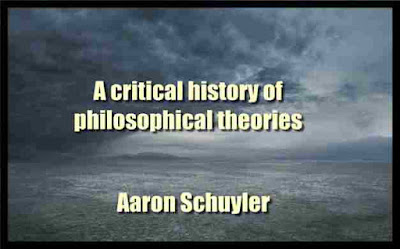 Introduction:
Philosophy is the result obtained by the employment of reason in the discovery of those fundamental principles that ^ give unity and harmony to knowledge. It seeks to reduce complexity to simplicity, and multiplicity to unity, and to find the ultimate reality. Facts acquired by observation are explained by reason.
The history of philosophy is the record of these speculations and their results. A critical history of philosophy is a discriminating examination of the theories of the philosophers of the various schools, in order to test and confirm their truth, to expose their errors, to trace the relations of the different systems, the conflict of their principles, the occasions of their appearance, and the order of their development. To understand the principles maintained by the philosophers of the various schools, the conflict of their principles, the reasons for their theories, and the connection of the various systems, is to understand philosophy itself.
The phenomenal world is the product of two factors the external world and the human mind; philosophy deals with both. Uncritical thought accepts appearance as the sole reality. Science classifies phenomena and determines their laws, while philosophy attempts to find a rational explanation of phenomena as facts of experience. That is, Science treats phenomena and their laws, while philosophy seeks causes and the rational explanation of phenomena.
Nothing can be more interesting or more stimulating to thought than the study of the relations of philosophy and science. It will be found that no system of philosophy is without some merit, though it may be only a crude beginning, or a one-sided attempt to give an account of the mystery of existence. Broad views are requisite if we wish to avoid the errors of all partial or incomplete systems. As the mission of philosophy is to give a rational explanation of the phenomenal, it cannot, therefore, disregard the facts of experience, and still be true to its calling. On the other hand, to deal exclusively with phenomena, discarding the necessary principles which afford their rational explanation, is to abandon the guide of reason, or to resolve it into transformed sensation. Herein is revealed the chief conflict in philosophy, as it exists between the empirical and rational schools.
To neglect facts is to lose sight of that which is to be explained; to discard necessary principles is to miss their true explanation. Either course is one-sided and doomed to failure. True philosophy is a combination of the two methods the observation of phenomena, and their explanation by the aid of rational principles.
No study is more interesting than that of the theories and speculations of philosophers. These theories will pass into review in the course of this treatise, and their truth or falsity will be critically and candidly examined. If the reader will study these investigations, neither in a partisan spirit nor in the temper of controversy, he will not fail of his reward. The distinction between things and ideas accords with the unbiased good sense of mankind.
The proper attitude of a philosopher is not that of a disciple of a great master, nor that of an advocate of a certain school of philosophy, but that of an independent thinker, and as such he will confer a benefit on other thinkers, not because of agreement, but rather because of divergence, and on that ac- count his investigations will receive a more hearty welcome. Philosophy is the love of wisdom.