The World's Sixteen Crucified Saviors. Or, Christianity Before Christ 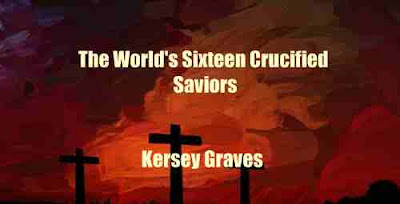 Containing new, startling, and extraordinary revelations in religious history, which disclose the oriental origin of all the doctrines, principles, precepts, and miracles of the Christian New Testament, and furnishing a key for unlocking many of its sacred mysteries, besides comprising the history of sixteen heathen crucified gods
„The World's Sixteen Crucified Saviors; Or, Christianity Before Christ“, is an 1875 book written by American freethinker Kersey Graves, which asserts that Jesus was not an actual person, but was a creation largely based on earlier stories of deities or god-men saviours who had been crucified and descended to and ascended from the underworld. Parts were reprinted in The Book Your Church Doesn't Want You to Read edited by Tim C. Leedom in 1994, and it was republished in its entirety in 2001.
The book is often used as a source by Christ myth theory proponents, such as Dorothy M. Murdock, Tom Harpur, and John G. Jackson. Many of the same theories espoused in the book are repeated in the documentaries
The God Who Wasn't There, The Pagan Christ, Zeitgeist: The Movie and Religulous.“ American Atheists leader Madalyn Murray O'Hair was a fan of the book. While modern-day American historian Richard Carrier found the book to be incomplete, he appreciated some of its points.
the book details : Download