The universe a vast electric organism 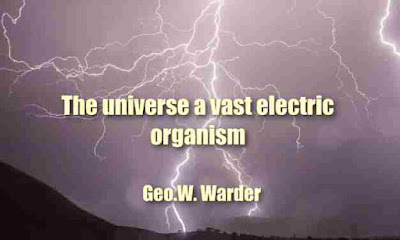 This volume is intended to further elucidate my theories of electrical creation, to cover some points lightly touched upon in my previous books; also to bring forward to date the most recent scientific facts and discoveries tending to show that the universe is a vast electric machine or organism. This is the electrical age of the world, the age of magnetic marvels and electrical wonders.
The people of this generation have witnessed the most astounding development of electrical machinery, appliances and utilities. In every department of effort human genius has called forth this invisible, mysterious magician, electricity, to work the miracles of Omnipotence.
And so rapid and marvellous have been the dis- coveries that the human mind stands paralyzed with wonder and amazement and asks, What next? In discovering electricity man has discovered the working force of Deity, the right hand of Omnipotence, the word of creative power, and uses it in all fields of human effort. With electric cables, electric motors, telephones, phonographs, electroscopes, wireless telegraphy and mental telepathy, the world is revolutionized, "the old heavens and the old earth have passed away, and behold! all things are new."
The new heavens and the new earth as I see it through scientific facts and analogies is a perfect electrical machine, a vast electro-magnetic organism of marvellous power and perfection. This "stupendous mass of matter and force" we call the universe is a complete whole, a perfect unity, creating its own light, heat and life and bound together by invisible electric ties of measureless power, as swift as lightning and as strong as Omnipotence.
Then I took up the study of electricity as a matter of curiosity and mental stimulus for my leisure hours from the law practice and realty investments. I had an indefinite idea that this mysterious force and the laws governing it might help to solve the riddle of the universe. I
studied its application to ordinary machinery and then applied it to the universe as a vast machine. And behold ! the universe as a mighty electric machine or organism answered every scientific question and solved every puzzle in the material world as far as I could comprehend them. I applied it to suns and planets, man and all animal and vegetable organisms, and as electric creations and electric generators, they explained a thousand mysteries. I found the man the most perfect electric organism, woven by electric energy from invisible atoms, receiving his physical life, growth and nutrition, and digesting and assimilating his food by an electric process, such as Prof. Loeb and Dr Matthews discovered in 1902, nearly twenty years after. I soon formulated a theory of electrical creation, which has recently been accepted by some of the ablest scientists. These things I discussed openly and on the platform for many years and then I published them in my book,
The New Cosmogony, in 1898, in Invisible Light in 1900 and in The Cities of the Sun in 1901. My attention was first called to this subject about twenty years ago when Prof. Henry built the first electric street railway ever built in this country. It was built on East Fifth Street, in Kansas City, Missouri, the city where I was living, and attracted much attention. It was used for only a short time because the machinery was not sufficiently perfected, and there was too great a waste of power, and the insulation was bad, for it magnetized and stopped the watches in the pockets of the passengers.
While pondering over this electric railway and its mysterious force, as I sat in the twilight in the parlour of the old Coates House, a servant came into light the gas. Instead of using a match, he turned on the gas, took a few gliding steps over the carpet and lit the gas by a flash of electricity from his finger, produced by touching his finger against the tip of the gas jet. I was surprised and said, "Have you enough fire in your body to light the gas?
Some contents:
I. The Universe Is a Vast Electric Organism, . . 11
II. Electricity Produces All the Phenomena of Nature. 29
III. Electrical Creation, Briefly Stated. It Seems to Solve
the Riddle of the Universe, . . . . . 49
IV. Electrical Creation More Fully Stated Confirms
Scientific Evolution, 54
V. Man Is a Soul Clad in Air, a Spirit in an Electric Organism, 76
VI. All Light, Heat and Life Evolved Only in the Atmosphere of Suns and Planets, .... 90
VII. Electrical Derangement of the Bodily Organism Produce Sickness and Death, 102
VIII. Recent Electric Discoveries and Appliances, Wireless
Telegraphy, etc., 112
IX. Present Science Is in a Dubious and Chaotic Condition, 133
X. Electrical Creation Explains Natural Philosophy. 156
XI. Science and Philosophy Sustain the Religious Concept, 173
XII. Human Reason and the Universe Are Books of God, as well as the Bible, .... . 194
the book details : Download 27 MB