The form and functions of the central nervous system 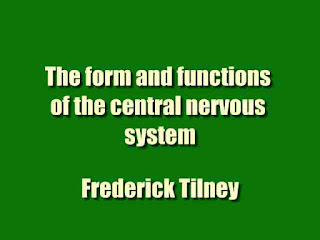 To what extent does the field of Neurology still invite the interests of future workers. In addition to much original work, many sources have been drawn upon for neurological facts and interpretations. Chief among these have been the great modern masters of Neurology, Cajal and Dejerine.
The more recent contributions of distinguished English neurologists, including such leaders as Gaskell, Elliot Smith, Hughlings Jackson, Head, Sherrington, Horsley, Holmes, Campbell and Wilson have provided a wealth of material. We are indebted to the work and influence of the American School of Neurology which has contributed extensively to the elucidation of the Component Theory.
For the most part, the interpretations given are those which have received the sanction of general acceptance. In a few instances, however, where the limits of our present knowledge concerning the functions of the nervous system are not j^et discernible, certain theoretical conjectures have been advanced, both for the purpose of avoiding confusion for the student and in the hope of stimulating further investigation.
There can be no question as to the desirability of such conjectures if for nothing else than that they demonstrate
Nowhere in the entire domain of medical education are the facts more clearly accentuated than in the adjustment of those branches of science which are grouped together to constitute the general field of vertebrate neurology. The interlocking facts of development, structure and function, and their interpretation under normal as well as pathological conditions, present an educational territory so complex in its relations and so replete with details as to call for the closest union of all the forces engaged in its cultivation. This need for cooperative extension becomes most marked in the purely morphological aspect of the entire subject.
No experienced instructor in the anatomy of the central nervous system fails to realize fully the difficulty of adequately presenting the enormouslj' complicated and intricate details of his subject in such form to his students for mental digestion and absorption, and with such collateral aids, as will bring the utmost possible clarity into the discussion and at the same time add a distinct realization of the interdependence of the various disciplines which combined from several sources to supply each a special part of the detailed picture forming the connected whole when brought into its proper position. For the purposes of sound morphological instruction and interpretation the neurological wards of a teaching hospital, its case histories and other illustrative material constitute for the neural morphologist the only authoritative laboratory of experimental zoology in which morbid conditions, altering the normal physiological reactions, point to the morj^hological basis and afford the final and conclusive demonstration of the functional significance underlying the details of organic structure.
Aspects of neurological teaching under the directorship of the senior author of the work now presented. Based on the Theory of the Neural Components, in the establishment of which American Science has contributed so largely, this book offers its consideration of the vertebrate central nervous organization from the standpoints of Phylogeny, Ontogeny, Morphology, Physiology and Pathology in a thoroughly connected and clear analysis which at all times keeps in open view the ultimate main purpose of this great undertaking, the comprehensive presentation of the cardinal factors involved in their mutual relationship. The authors sum up the fundamental concept which guided and directed their labours in their "Introduction to the Study of Nervous Diseases" as follows:
"This work is designed to fill the gap between morphology and the practical requirements of clinical medicine. It aims to visualize the living nervous sj^stem, to make accessible an appreciation of its vital relation to the functions which go to make up life as well as the defects in these relations which result in disease." How well they have attained the goal thus set at the outset of the undertaking, the admirable result achieved with this publication is destined to show. Its ultimate place in the scientific literature may be confided to the judgment of those who will read and study its pages.
The authors, beginning as my students, became my valued colleagues, an association which during the course of many years has grown into a close friendship.
They have honoured me by asking me to write a foreword to their book. I am conscious of the fact that nothing I have said can add one element of value to the great intrinsic worth of their contribution, but I feel that I cannot resist the expression of my own sense of gratitude for the privilege which I have enjoyed and the mental stimulus I have received in being permitted to observe and profit by the years of intensive and productive study in the morphological laboratory of this institution which has gone into the creation of this volume.
the book details : Download 59 MB