The adventures of Odysseus and the tale of Troy 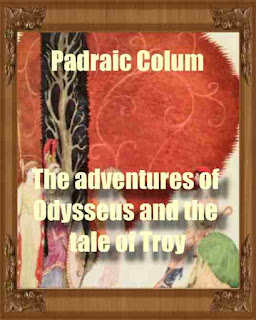 This is the story of Odysseus, the most renowned of all the heroes the Greek poets have told us of — of Odysseus, his wars and his wanderings. And this story of Odysseus begins with his son, the youth who was called Telemachus. It was when Telemachus was a child of a month old that a messenger came from Agamemnon, the Great King, bidding Odysseus betake himself to the war against
Troy that the Kings and Princes of Greece were about to wage. The wise Odysseus, foreseeing the disasters that would befall all that entered that war, was loth to go. And so when Aga- Memnon's messenger came to the island of Ithaka where he was King, Odysseus pretended to be mad. And that the messenger, Palamedes, might believe he was mad indeed, he did a thing that no man ever saw being done before — he took an ass and an ox and yoked them together to the same plough and began to plough a field.
And when he had ploughed a furrow he sowed it, not with seeds that would grow, but with salt. When Palamedes saw him doing this he was nearly persuaded that Odysseus was mad. But to test him he took the child Telemachus and laid him down in the field in the way of the plough. Odysseus, when he came near to where the child lay, turned the plough aside and thereby showed that he was not a mad man. Then had he to take King Agamemnon's summons.
And Agamemnon's word was that Odysseus should go to Aulis where the ships of the Kings and Princes of Greece were being gathered. But first, he was to go into another country to seek the hero Achilles and persuade him also to enter the war against Troy. And so Odysseus bade goodbye to his infant son, Telemachus, and to his young wife, Penelope, and to his father, old Laertes. And he bade goodbye to his house and his lands and to the island of Ithaka where he was King. He summoned a council of the chief men of Ithaka and commended to their care his wife and his child and all his household, and thereafter he took his sailors and his fighting men with him and he sailed away.
The years went by and Odysseus did not return. After ten years the City was taken by the Kings and Princes of Greece and the threat of war was wound up. But still, Odysseus did not return. And now minstrels came to Ithaka with word of the deaths or the homecomings of the heroes who had fought in the war against Troy. But no minstrel brought any word of Odysseus, of his death or of his appearance in any land known to men. Ten THE ADVENTURES OF ODYSSEUS years more went by. And now that infant son whom he had left behind, Telemachus, had grown up and was a young man of strength and purpose.
PART I
How Telemachus the Son of Odysseus Was Moved to Go on A Voyage in Search of His Father and How He Heard from Menelaus and Helen the Tale of Troy.
PART II
How Odysseus Left Calypso's Island and Caaie to the Land OF THE Phapacians; How He Told He Fared with the Cyclopes and Went Past the Terrible Scylla and Charybdis and Came to the Island of TniuananaWhere His Men Slaughtered the Cattle of the Sun; How He Was Given a Siup by the Phaeacians and Came to His Own Land; How He Overthrew the Wooers Who Wasted His Substance and Came to Reign Again as King of Itilka.
the book details : Download