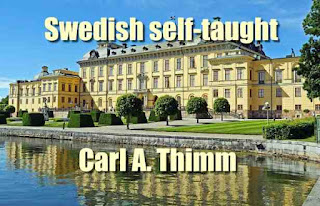 Tn issuing another of the representative languages of the Scandinavian group Swedish in the Marlborough " self-taught " series, it may be well to state that it has some characteristics in common with its companion volume, " Norwegian self-taught," as, for instance, the post-position of the article and its coalescence with the noun to denote the definite state, but there is, nevertheless, a wide divergence in rhythm and pronunciation between the two languages.
This little manual is designed to meet the general requirements of students, travellers, tourists with cycle or camera, sportsmen and others; the system of phonetics followed is that used in the Marlborough " self-taught " series (for a complete list see cover), and is so simple that those previously unacquainted with Swedish can, with its aid, make themselves understood at once.
The idea of the phonetic, or third column, is to give in an intelligible and easy manner, the pronunciation at a glance of Swedish as it is spoken among the educated classes in Stockholm so far as words can possibly convey the exact sound.
In the carrying out of this system, I am greatly indebted to the assistance of Mr. W. F. Harvey, m.A., for some years universitetslektor at the royal university of Lund (Sweden), who is an acknowledged authority on the Scandinavian languages and literature.
Students who conscientiously learn the contents of this little volume and for them, a concise elementary grammar is added will find it an easy guide to a language which will amply repay them for the trouble necessary in mastering it. It will not only introduce them to a literature of much interest but also enable them to understand the aims and aspirations of a kindly, cultured and hospitable people.