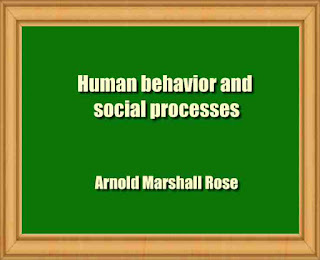 When one considers how important symbolic inter- action theory has been to social psychology, how great has been the number of students w^ho have been exposed to its teachings over the years, and how abundant have been the scholarly contributions made to it, it is indeed surprising that so little should have been done up to now to consolidate our knowledge of this body of theory. Here is a singular lag that Arnold Rose and his collaborators have sought to correct.
They have given us in this book the fullest available account of the theory of symbolic interaction. They have provided us with more of its facets, nuances, and implications than we have had before. Especially have they demonstrated the utility of the theory for research.
This book shows that interaction theory' can provide us with a body of significant testable propositions regarding the relationship of self and society. This book is significant, then, because of its subject matter. It is important also because it is well done. And it is well done in part because the contributors are all highly competent. Besides, Professor Rose has exercised his editorial powers freely.
He commissioned most of the chapters expressly for this book and provided common instructions to the authors. The result is a symposium with unusual coherence. Human Behavior and Social Processes meets a long-standing need and merits the attention of teachers of social psychology.
Some scientific theories are systematically stated and empirically buttressed by their innovators. Others grow crescively, with an idea here, a magnificent but partial formulation there, a little study here, a program of specialized studies there.
The interactionist theory in sociology and social psychology be- longs in the latter category: it had its predecessors in certain ideas of William James and James Mark Baldwin; it was developed in various ways by John Dewey, Charles Horton Cooley, William I. Thomas, Florian Znaniecki, Robert E. Park, and especially George Herbert Mead. Significant contributions were made by Ernest W. Burgess, Herbert Blumer, Everett C. Hughes, and Louis Wirth. Empirical researches supporting the theory were conducted by these and many others.
perhaps half the sociologists of the United States were nurtured, directly or indirectly, on its conceptions and approaches to research. But nowhere within the confines of one volume has there been a systematic formulation of interaction theory, or a summary of empirical support for it, or even a collection of related contributions by several exponents.
For a theory that emphasizes the significance of self-consciousness, it has been unusually devoid of self-consciousness, as expressed by the writers most closely associated with its development. It does not even properly have a name, the term "interactionist" being a latter-day appellation
Interactionist theory has had a considerable impact on sociological research and thought, as the separate chapters of this volume will testify. Its influence has extended to a number of psychologists, psychiatrists, social workers, and others.
The influence continues through the years. But the lack of systematic formulation and of "self-consciousness" renders the research contributions and ex- tensions of the theory somewhat disparate; there is no adequate cumulation of theory and confirmation. One of the purposes of the present volume is to fill this gap.
In presenting this volume, we do believe that every serious student and investigator of human behaviour should be familiar with interactionist theory and research.
We have tried to present our materials in such a way that they will be intelligible and useful to psychologists as well as sociologists and to sociologists in the functionalist, historical, and positivist traditions as well as to sociologists in the interactionist tradition.
But we are aware that, such being the nature of attachments and commitments to the theoretical tradition that one has been trained in (this itself as interactionist observation), most of the teachers who will want their students to read this volume will be in the interactionist tradition.
While the volume is useful in several courses in sociology, it is most useful as a text in courses in social psychology.
the book details : Download 29.3 MB