The rise of intellectual liberty from Thales to Copernicus 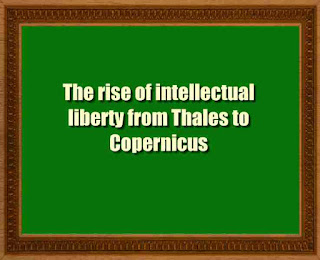 Wishing to show how thought was set free and new truth brought to light, during the twenty-two hundred yl^rs from the age of Thales to that of Copernicus and Servetus, I have tried to collect the important facts, especially such as had not been stated in English, to arrange them in their his- toric relations, not yet fully delineated in any language, and then to let them tell their own story, without needless comment.
I did not start with the intention of proving anything; and it was only when I was ready to write the last chapter, that I found myself justified in drawing the conclusions set forth. Authorities differ widely, especially about medieval his- tory, and dates of publication are often given incorrectly — that for instance of the Involuntary Servitude by La Boiitie being put in half-a-dozen different years by as many of the standard books of reference.
Oversights are almost unavoidable in any comprehensive work, and I shall be grateful for help in correcting my own, but I trust I shall not be hastily charged with inaccuracy on account of not having followed a popular guide. I hope ere long to publish a continuation extending as far as the French Revolution.
Some contents:
Chapter I. Early Philosophy.
Introduction 1
I. The Buddha and other Prophets 1
II. The lonians 3
III. Persecution at Athens 7
IV. Socrates 16
V. Plato 24
VI. Other Disciples of Socrates 28
VII. Aristotle 33
VIII. Conclusion 35
Chapter II. The Conquest op Paganism during the last Three
Centuries, B. C.
Introduction 36
I. Pyrrho and the New Academy 36
II. The Stoics 38
III. Epicurus » 41
IV. Lucretius 51
V. Science 57
VI. Victory 59
Chapter III. Partially Successful Attempts at Reaction Dur-
ing THE First Two Hundred Years of the Roman
Empire.
I. The Policy of Augustus 61
II. Jesus 65
III. The Stoic Martyrs 70
IV. The Emancipation of Women 76
V. The New Testament 78
VI. The Early Christians 82
Ti. CONTENTS.
FAGK
VII. Reign of Liberal Paganism 85
VIII. Lucian ^\
IX. Conclusion ^^
Chapter IV. The Stjpprkssion op Free Thought and Establishment OF Christianity.
I. Tertullian 97
' II. The Alexandrians and their pupils, including Zenobia ... 101
III. The Decline of the Empire the Result of Despotism — lOti
IV. The Establishment of Christianity 109
V. Triumph of Bigotry 119
VI. General Survey of Classical Thought 133
Chapter V. Early Medieval Heresy.
I. Rationalists before A. D. 1,000 136
II. Berengar, Roscellin and the Catharists 131
III. Other Early Agitators 140
IV. Abelard and Heloise 144
V. Averroes and Maimonides 153
VI. Waldenses and Mystics 154
VII. Conclusion 158
Chapter VI. Suppression of Heresy, Dualism and Persecution
OF Mysticism and Scholarship in the Thirteenth
Century.
I. The Situation 163
II. The Crusade against Tolerance 164
III. The Destruction of Catharism by the Inquisition 169
IV. The Persecution of Mysticism 174
V. Satirists and Rationalists 178
VI. Royal and Popular Resistance to Oppression 185-
VII. Summary 196
Chapter VII. The Revolt of France and Germany in, the
Fourteenth Century.
I. The Situation 300
II. Philip and Boniface 201
III. The Templars 208
IV. Dolciuo 211
V. Dante 213
VI. The Mystics 330
VII. Louis of Bavaria 230
VIII. Other Opponents of the Papacy before 1360 233
IX. Summary 838.