A Biographical dictionary of modern rationalists 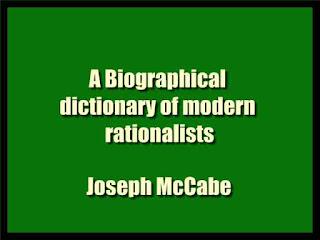 From Introduction:
the term " Rationalist " first appears in English letters about the middle of the seventeenth century (Clarendon, State Papers, II, App. XL). It denotes a sect who follow " what their reason dictates to them in Church or State." Bacon had a little earlier {Apophthegms, II, § 21) applied the term " Rationals " to the philosophers who sought to attain truth by deductions from the first principles which reason was supposed to perceive rather than by induction from the observed facts of nature. In neither sense did the term pass into general currency at the time; but in the course of the nineteenth century, it has been adopted as the most fitting name for those who uphold what is vaguely called the supremacy of reason in the discovery and establishment of truth.
The technical use of the term in philosophy is not regarded in the compilation of this Dictionary. It still denotes, in the Baconian sense, those who advocate deductive and transcendental rather than inductive or empirical systems of thought. But, since induction is no less a process of reason than deduction, the distinction is not happily framed, and it does little more than designate the tendency to attach value to metaphysical speculation as distinct from the empirical or scientific study of nature. The modern Rationalist may choose either method in separate fields of investigation,.
His characteristic is that in the ascertainment of fact he affirms the predominance and validity of reason over revelation, authority, faith, emotion, or instinct; and general usage has now confined the term to those who urge this predominance of reason in regard to the Christian religion.
In matters of State, the rights of reason are theoretically admitted. Rationalism is therefore primarily a mental attitude, not a creed or a definite body of negative conclusions.
No uniformity of opinions must be sought in the thousands of men and women of cultural distinction who are here included in a common category.
The one link is that they uphold the right of reason against the authority of Church or tradition; they discard the idea of revelation as a source of truth, and they deny the authority of a Church or creed or tradition to confine the individual judgment.
Yet this common link is overlaid in this series of little biographies with so much variety of opinion, and the title to be called Rationalist in this sense is now so frequently claimed by men who linger in some branch of the Christian Church, that a more precise statement is needed. nationalism has, like every other idea or institution, evolved; and the earlier phases of its evolution still live, in some measure, side by side with more advanced stages of rebellion.
The variety of types included in this work, and the principle of selection, thus become intelligible. It includes Theists (when they do not conform to the authority of any branch of the Christian Church), Pantheists, Agnostics, and the few who prefer to be called Atheists. It includes distinguished Secularists, Positivists, Monists, and Ethicists. But amid this variety, there is a steady progression that is obscured by the need to arrange the names in alphabetical order. Only about a hundred names are chosen for the period before the French Revolution, and they are overwhelmingly Deists.
Possibly some two hundred names then belong to the period between the French Revolution and the middle of the nineteenth century, and already a material change can be detected in the list. The Deists sink into a minority, while Pantheists and Non-Theists increase. The vast majority of the names in the work belong to this and the last generation, and they are predominantly the names of Agnostics, Positivists, Monists, and others who do not accept any fundamental religious beliefs.
the book details :
Download 26.6 MB