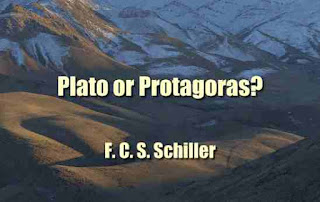 Being a critical examination of the Protagoras speech in the Theætetus with some remarks upon error.

In a somewhat shorter form, this Essay was read to the Oxford Philological Society on the 15th Novem- ber, 1907, and there had the benefit of valuable criticisms from Mr H. P. Richards, Mr R. R. Marett and others. I have in consequence been enabled to realize more clearly the divergences from the current theories as to the import of the Thecetetm to which my own studies had conducted me.
They proved to be more extensive than I had suspected and to involve some interesting and novel issues both of a literary and of a philosophic character. It seemed a duty, therefore, to render my conclusions accessible to the learned world, to which the problems of Platonic criticism are of perennial interest. But though my primary purpose is to raise a literary question, I have not thought it either right or possible to slur over the philosophic importance of my thesis.
The philosophical significance of the Theaetetus has been very strangely misconstrued. It contains no tenable account of knowledge. It contains no refutation of Humanism. It refutes nothing but an extreme, and probably exaggerated or misapprehended, a form of sensationalism. Nothing of all this has, apparently, been perceived. Nor, again, has what it does contain been fully recognized. It is a, swiping repudiation of the senses and the feelings as contributors to the growth of knowledge.
It contains a renunciation by Platonic logic of the duty of explaining the individual. It is a glorious monument of the Weltflucht to which Pure Thought finds itself impelled whenever it is taken seriously. And its very patient and subtle researches into the problem of knowledge culminate in the frankest and sublimest confession of failure which adorns the annals of intellectualistic literature.
Whether or not, therefore, it is possible to exhume from it the lost teachings of Protagoras, it is clear that in the study of Plato's great dialogues, and particularly of the ThewMus, lies the master-key to the understanding of the whole intellectualistic position in philosophy.
the book details : Download