Passages from the American notebooks 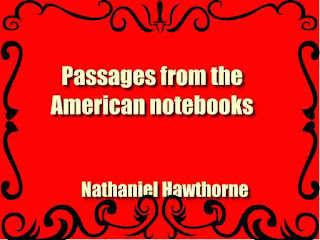 It was almost inevitable that a man so re¬ served as Hawthorne and yet so impelled to find expression should make a confidant of his notebook. Moreover, it might almost be called a peculiarity of the New England folk, whose genius was so representative in Hawthorne, to keep a daybook.
For the most part, these records, like the Sewall Diary, were family annals, and many a man upon being married set up what he called a Family Book, in which he jotted down day by day the events which marked the family life; but the custom was common, and children, who so quickly imitate their elders, would also start their little diaries. Hawthorne himself, if we may trust the careful research of Mr Pickard, kept a boyish journal when in the woods of Maine in his youth,1 and there is reason to suppose that he did not wholly discontinue the habit when in college, and in the ten years after graduation when he was living in the solitude of Salem.
It is very earnestly hoped that these volumes of Notes — American, English, and presently Italian — will dispel an often-expressed opinion that Mr Hawthorne was gloomy and morbid. He had the inevitable pensiveness and gravity of a person who possessed what a friend of his called “ the awful power of insight; ” but his mood was always cheerful and equal, and his mind peculiarly healthful, and the airy splendour of his wit and humour was the light of his home.
He saw too far to be despondent, though his vivid sympathies and shaping imagination often made him sad on behalf of others. He also perceived morbidness, wherever it existed, instantly, as if by the illumination of his own steady cheer; and he had the plastic power of putting himself into each person’s situation, and of looking from every point of view, which made his charity most comprehensive. From this cause, he necessarily attracted confidences and became confessor to very many sinning and suffering souls, to whom he gave tender sympathy and help while resigning judgment to the Omniscient and All-wise.
the book details : Download 17.8 MB