The open secret - a study of life's deeper forces 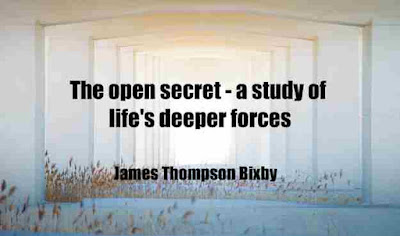 One of the notable things in that notable book of the Old Testament containing the prophecies of Ezekiel is the curious vision with which the book opens. A labyrinth of wheels and monstrous creatures — the despair of commentators — is described, where within the beryl-tinted wheels are still other wheels, and again within each wheel there is enclosed the spirit of some living creature.
Whenever any draughtsman has sought to make a representation of these winged cherubim, with their bovine feet and symbolic faces of beast and man, appearing like burning coals or has tried to sketch pictures of these enclosing wheels that were each enclosed by other wheels and in their swift motion followed the guidance of the living spirits within — whenever, I say, any artist has tried to depict this vision he has found it impossible to imagine it without becoming involved in inextricable confusion. Nevertheless, the general idea symbolized by this vision is one that is not merely quite rational but is an idea most significant and instructive.
The essential lesson of the vision is that every living creature has around him some revolving machinery and that within all the mechanical wheel-works which are visible there is a living soul as the motor power and directing agency of the enclosing enginery.
Think for a moment of that phrase: "The spirit of the living creature in the wheels." Is it not a wonderfully terse and pregnant summing up of the infinitely vast and varied phenomena of the universe.? What wheels within wheels characterize the Cosmos? Whirling suns and planets, satellites revolving punctually in their orbits, earth- circling tides, the constant circuit of vapours from sea and lake to cloud and back again by raindrop and streamlet to mother ocean, and that Protean circle of transformations by which the solar energy changes from light to heat, and heat to chemic or electric attraction and returns again without loss of original force — what wheels within wheels constitute the complexity of Nature!
A great German scientist, seeking a title for his work on the mysterious phenomena of vitality, could find none so satisfactory to him as "The Circulation of Life." The very condition of vitality seems to be this constant rotary motion. In man, the blood under the un- wearied beat of the heart must course out to the capillaries and brain cells with its fresh supplies of nutriment and energy and must then flow back again to the lungs to become purified and recharged with oxygen. The nerve currents must flow with their sense impressions from the surface up the sensory nerves to the brain and back again inappropriate motor responses to the muscles
. In the lung, heart, ganglion, blood corpuscle, cell and molecule, there is a constant round. There is continual efflux and influx, consumption and replenishment. It is only by this ceaseless dying and as ceaseless rebirth, that animate be- ings keep alive. And to maintain this circulation of life, what curious and complicated machinery in every part of the body — the valves of the heart, the batteries of the brain, the triangular muscle of the chin, the levers of arm and leg, with their beautiful ball and socket joints, the keyboard of the ear with its three thousand strings, and the hundred other equally ingenious contrivances that make up this moving house of flesh, most of them working so automatically and perfectly that it is only on the occasions that they get out of order that man takes any thought of the complicated mechanisms and delicate adjustments by which he walks and talks and breathes.
Contents:
Vitality and mechanism. -The cosmic motor power. -Atom and spirit. -Purpose in nature. -Law and Providence. -Good the final goal. -Fate or choice. -Our self-made world. -Partners in world-making. -Search the deep things
the book details :
Download 8.4 MB - PDF ebook