The moral life, a study in genetic ethics 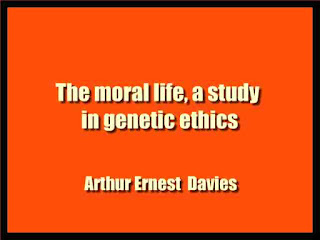 From the introduction:
"The moralist, like the savant," writes M. Duprat, "must at the beginning of his investigations be ignorant of the point at which he will emerge." In the spirit of the statement, I can best describe this book as an inquiry. It embodies an attempt to determine, in the light of recent advances in psychological knowledge, what are some of the more important and fundamental characteristics of moral life. It is not, however, a contribution to the phenomenology of ethics.
Important additions have been made, in the past few years, to the literature of this subject, notably in the works of Westermarck, Hobhouse, and Wundt, and there seems now to be no danger that carefully collected and patiently sifted data will remain a desideratum of ethical science. It is, therefore, not my intention, even if I could claim the qualifications, to add to the number of books which deal with the morality of peoples at different levels of culture; but it has been my aim constantly to bear in mind what is to be learned in this field, and it is hoped that nothing has been set down in the following pages that cannot find confirmation in the labours of the experts in this line of research.
The relation of my work to sociology requires a brief explanation. If we consider the tendencies among modern writers on sociology and ethics, sociology seems to be engaging itself more and more with ethical considerations, and ethics with equal diligence in cultivating social and sociological material. Thus a mutual rapprochement of sociology and ethics seems to be a sign of the times, and, in some quarters, the denial is already heard that the two can much longer remain separate and independent branches of knowledge.
If further, we emphasize the dependence of ethics upon psychological method, a dependence which throughout its history has never been wanting, an additional motive is found for remarking upon the unstable character of the science of ethics, and the conclusion is sometimes drawn, as for example by Simmel, that nothing can prevent the dissolution of ethics as an independent science, and the handing over of its distinctive material and problems to sociology and psychology. I
n view of such facts as these facts which point to the reconstructions which are taking place in sociology, psychology, and ethics, it is not surprising if the ethicist finds it necessary to define somewhat carefully his own particular problem and to state the distinctions which mark it off from other related studies.
This statement will explain the form which the discussion of the latter part of chapter II takes in this book a discussion which is concerned with the differentia of ethics. And if any further explanation of my method in dealing with sociological questions is required, I can only say that I have felt it necessary to examine in some detail the concepts of a social sort which are presupposed in ethical science and have had to refer at various points to the sociological treatment of these concepts in a critical way, because our knowledge of social facts is constantly undergoing enlargement, and because sociology must be understood to have reserved to the future its own systematic consideration of the implications of social phenomena.
I have referred to ethnology and sociology because in important respects they are, just now, the two most conspicuous sources from which, in varying degrees, assistance may be had for the carrying on of ethical inquiries. However, a broad and well-considered view of the moral life can be gained only when we refuse to be confined within the limits of these two disciplines. Some remarks on this question will be found in the earlier chapters: here all that is necessary is to point out that the subject of this essay is not covered by either of these related sciences. Like each of them, genetic ethics is a determination of fact; and unlike both, the facts which it elucidates relate to the principles through which the moral life gets its organization, and by which it attains its development.
I am not advancing a philosophy of morality: the humbler task has been attempted of dealing with the texture, or inner structure, of the moral life; and this, not as a theory, but as a fact which may be verified by the use of the appropriate methods. The methods are psychological. And if there is anything characteristic in the result, it is this: that the mental and the moral are seen to be interrelated and inseparable factors in the organization and growth of human societies, that moral soundness is based in mental development, and that mental integrity is impossible apart from moral growth.
The doctrine is not new; in some respects, it is as old as Greek thought. But the grounds on which the view is here seen to rest are modern. They have been made possible by the development of more accurate methods in psychology, and the specialization of problems in this field.
The influence of these advances in psychology may be seen nowhere better, perhaps, than in the large place I have given to the discussion of the moral motive, a subject which is dismissed with a few paragraphs in most treatises, and, with the exception of Wundt s work on ethics, does not rise to the dignity of a chapter. The topics selected for discussion have been chosen on a definite plan.
the book details : Download