Monopolies past and present 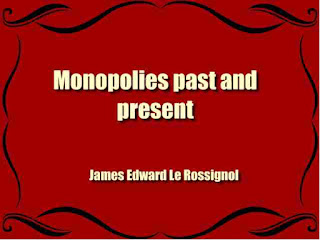 In the following pages the writer has endeavoured to provide a historical introduction to the study of monopolies for the use of busy men who may wish to find in a single brief work a digest of a mass of information only to be obtained in a number of special treatises. For the convenience of those who wish to pursue a further investigation of the subject presented a list of the chief secondary sources of information is given at the beginning of each chapter.
The problems connected with modem monopolies are stated as clearly and concisely as possible, and it is hoped that the reader will not be satisfied with the solutions proposed but will be sufficiently interested to work out conclusions of his own.
The writer desires to acknowledge his indebtedness to the works of the authors whose names are mentioned in the text, but particularly to the works of Cunningham and Ashley, from which he has obtained much information concerning English economic history.
According to its derivation, the word monopoly means exclusive sale. Exclusive sale is based upon exclusive possession or control of the commodity that is for sale. If at the siege of some city one man had possession or control of all the food in that city, no food could be sold without his permission. He would have a monopoly of food and would be called a monopolist.
This would be a monopoly in the primitive meaning of the word. But the word may be used in another sense as well. When the Hudson's Bay Company had exclusive control of the fur trade throughout the vast region drained by the rivers flowing into Hudson's Bay and the Arctic Ocean, the savages who wished to sell their furs without journeying to the distant French settlement were obliged to sell them to the great fur company. The company was the sole buyer of furs and the sole seller of firearms and blankets and had therefore a monopoly of the buying of furs and a monopoly of the sale of blankets. Monopoly is therefore exclusive buying as well as exclusive selling. This is an absolute monopoly, where competition is absolutely excluded.