Magic in names and in other things 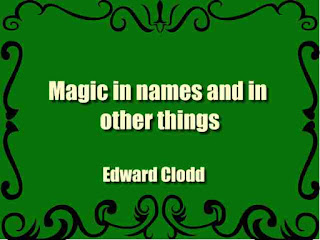 In an article on " magic " contributed to Hastings's Encyclopedia of Religion and Ethics, Dr Marett says that " the problem of its definition constitutes a veritable storm-centre in the anthropological literature of today." In this disturbed zone the questions of
(1) the origin and elements of magic, and  (2) its place in the order of man's spiritual evolution, are discussed. Upon each of these, only a brief comment is here necessary. As to the first question, one set of combatants contend that magic is " pseudo-science "  — " the physics of the savage," as Dr Adolf Bastian defines it. " It cannot," says Sir Alfred Lyall, " be doubted that magic is founded on some dim notion of cause and effect which is the necessary basis of all human reasoning and experience."
In agreement with this, Sir James Frazer says that " the analogy between the magical and the scientific conceptions of the world is close. In both of them, the succession of events is perfectly regular and certain, being determined by immutable laws, the operation of which can be foreseen and calculated precisely; the elements of caprice, of chance, and of the accident are banished from the course of nature."  To this, an opposite school replies that the theory assumes a higher stage of mentality than savage races have reached.
They are unable to conceive of constant relations between cause and effect. The how and why of things is a late conception in human development. What appears to rule the life of man at his lowest, and to persist in often unsuspected form throughout his history, is the sense of a vague, impersonal, ever-acting, universally- diffused power which, borrowing the word for it common to the whole Pacific, is called mana?
To quote from the classical work on the subject, " Mana is not fixed in anything and can be conveyed in almost anything. It works to affect everything which is beyond the ordinary power of men, outside the common processes of nature, it is present in the atmosphere of life, attaches itself to persons and to things, and is manifested by results which can only be ascribed to its operation.
Wizards, doctors, weather-mongers, prophets, diviners, dreamers, all alike, everywhere in the islands, work by this power."  Mana is the stuff through which magic works; it is not the trick itself, but the power whereby the sorcerer does the trick. To the Omaha Indians, Wakonda is " the power that makes or brings to pass," and the like meaning is attached to the Iroquois orenda or Oki, to the Algonkin manitou, to the Kutchi of the Australian natives, to the agud of the Torres Straits Islanders.
The sorcerer acts alone; he works for his own ends. Now and again he serves the commonweal, as when, by his spells, he inspires the tribe against the foe, or makes believe to control the wind and weather. But, practically, his arts are directed against the individual. To quote M. Durkheim, " Between the magician and the individuals who consult him there are no lasting bonds which make them members of the same moral community comparable to that formed by the believers in the same god or the observers of the same cult; the magician has a clientele and not a Church.
the book details : Download 8.2 MB