The Limits to growth 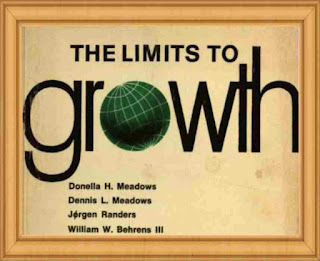 The Limits to Growth is a 1972 book about the computer modelling of exponential economic and population growth with finite resource supplies. Funded by the Volkswagen Foundation and commissioned by the Club of Rome it was first presented at the St. Gallen Symposium. Its authors were Donella H. Meadows, Dennis L. Meadows, Jørgen Randers, and William W. Behrens III.
The book used the World3 model to simulate the consequence of interactions between the Earth's and human systems.
Five variables were examined in the original model. These variables are world population, industrialization, pollution, food production and resource depletion. The authors intended to explore the possibility of a sustainable feedback pattern that would be achieved by altering growth trends among the five variables under three scenarios. They noted that their projections for the values of the variables in each scenario were predictions "only in the most limited sense of the word," and were only indications of the system's behavioural tendencies. Two of the scenarios saw "overshoot and collapse" of the global system by the mid to latter part of the 21st century, while a third scenario resulted in a "stabilized world."
From the introduction:
IN APRIL 1968, a group of thirty individuals from ten countries — scientists, educators, economists, humanists, industrialists, and national and international civil servants — gathered in the Accademia dei Lincei in Rome. They met at the instigation of Dr Aurelio Peccei, an Italian industrial manager, economist, and man of vision, to discuss a subject of staggering scope — the present and future predicament of man.
Out of this meeting grew The Club of Rome, an informal organization that has been aptly described as an "invisible college." Its purposes are to foster understanding of the varied but interdependent components — economic, political, natural, and social— that make up the global system in which we all live; to bring that new understanding to the attention of policy-makers and the public worldwide; and in this way to promote new policy initiatives and action.
The Club of Rome remains an informal international association, with a membership that has now grown to approximately seventy persons of twenty-five nationalities. None of its members holds public office, nor does the group seek to express any single ideological, political, or national point of view. All are united, however, by their overriding conviction that the major problems facing mankind are of such complexity and are so interrelated that traditional institutions and policies are no longer able to cope with them, nor even to come to grips with their full content.
The members of The Club of Rome have backgrounds as varied as their nationalities. Dr Peccei, still the prime moving force within the group, is affiliated with Fiat and Olivetti and manages a consulting firm for economic and engineering development, Italconsult, one of the largest of its kind in Europe. Other leaders of The Club of Rome include Hugo Thiemann, head of the Battelle Institute in Geneva; Alexander King, scientific director of the Organization for Economic Cooperation and Development; Saburo Okita, head of the Japan Economic Research Center in Tokyo; Eduard Pestel of the Technical University of Hannover, Germany; and Carroll Wilson of the Massachusetts Institute of Technology. Although membership in The Club of Rome is limited, and will not exceed one hundred, it is being expanded to include representatives of an ever greater variety of cultures, nationalities, and value systems.
The book was digitized and made available with the permission of the authors by Dartmouth College Library
the book details : Download 34.7 MB