The life of the weevil 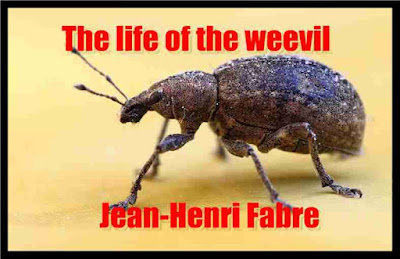 I have gathered into this volume the essays on Weevils contained in the Souvenirs entomologiques, lest I should swell unduly the number of volumes devoted to Beetles, of which there will be three in all, or four if we include the present book. Chapters I. and VII. to IX. have already appeared, wholly or in part, in an illustrated miscellany, entitled The Life and Love of the Insect, translated by myself and published by Messrs. Adam and Charles Black (in America by the Macmillan Co.), and Chapter V. and parts of Chapters XI. and XII. in a similar volume, entitled Social Life in the Insect World, translated by Mr Ber- nard Miall and published by Messrs. T. Fisher Unwin Ltd. (in America by the Century Co.). I am permitted by arrangement with the firms named to retranslate and reissue the chapters in question for the purpose of this collected and definitive edition of Fabre's entomological works. I am also under no small obligation to Mr Miall, who has given me the benefit of his assistance throughout.
In winter, when the insect takes an en- A forced rest, the study of numismatics affords me some delightful moments. I love to interrogate its metal disks, the records of the petty things which men call history. In this soil of Provence, where the Greek planted the olive tree and the Roman planted the law, the peasant finds coins, scattered more or less everywhere, when he turns the sod. He brings them to me and consults me upon their pecuniary value, never upon their meaning.
What matters to him is the inscription on his treasure-trove! Men suffered from yore, they suffer today, they will suffer in the future: to him, all history is summed up in that! The rest is sheer futility, a pastime of the idle. I do not possess this lofty philosophy of indifference to things of the past. I scratch The Life of the Weevil the piece of money with my fingernail, I carefully strip it of its earthy rind, I examine it with the magnifying glass, I try to decipher its lettering.
And my satisfaction is no small one when the bronze or silver disk has spoken. For then I have read a page of humanity, not in books, which are chroniclers open to suspicion, but in records which are, in a manner, living and which were contemporary with the persons and the facts.
Weevils are beetles belonging to the superfamily Curculionoidea, known for their elongated snouts. They are usually small, less than 6 mm (1⁄4 in) in length, and herbivorous. Approximately 97,000 species of weevils are known. ... Many weevils are considered pests because of their ability to damage and kill crops. (Wikipedia)
the book details : Download 4.8 MB