The Latin Kingdom of Jerusalem 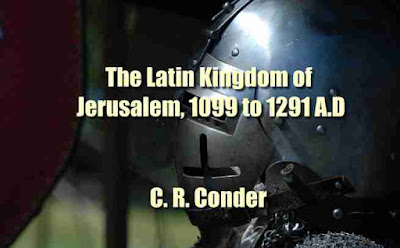 The sources on which we depend for the history of the time of the great Crusades, and which have been used by Gibbon and Michaud, are well known and accessible. They include the Chronicles of Foucher of Chartres, who accompanied Robert of Normandy (1095-1124 A.D.), and of Raymond of Aguilera, who was also present at the conquest of Antioch, with that of Albert of Aix, and the great history of William, Archbishop of Tyre, which was begun in 1182 and closes in 1184.
These I have read in the great collection of Bongar's Gesta Dei Per Francos (Hanover, 1611), which also includes the important description of later events by Jacques de Vitry, Bishop of Acre, written about 1220 A.D.f The Moslem accounts include Boha ed Din's life of his master Saladin about 1200 A.D., and the later works of Kemal ed-Din, Mejr ed-Din, Abu el Feda, and Makrizi, with El Edrizi's geography about 1150 A.D.
The full details of King Richard's expedition are given in the contemporary account of Jeoffrey de Vinsauf, written about 1200 A.D.; and for the Crusade of St. Louis, we have Joynville's Memoirs, the travels of Rubruquis, and Marco Polo, all full of vivid pictures of the age.
The pilgrim geographies now published by the Palestine Pilgrim Texts Society are equally important and well known; and even the later work of Marino Sanuto throws light on many questions, while the travels of Benjamin of Tudela explain the condition of the Jews in the East about 1 1 60 A.D. I have not thought it necessary to give exact citations in every case, where sources so well known have been consulted.
The object of this volume is, however, not so much to relate the history of Crusades, as to present a picture of the curious social conditions that resulted from the establishment of a feudal society amid Oriental surroundings, and to trace the growth of civilisation and prosperity during the two centuries of Latin rule.
The period is one of the most interesting in history, and the results of Frank colonisation in Palestine were far-reaching and important. A large amount of material also exists, which has not as yet been utilised fully in treating these questions. French antiquaries and especially Rey have diligently collected the contemporary documents, which relate to the tenure of land, and to the gifts and sales to the Church and to the great Military Orders.
Herr Rohricht in Germany has, quite recently, reduced to chronological order a list of 1,500 documents, of the twelfth and thirteenth centuries, which relate to the Kingdom of Jerusalem. The geography of the age was only imperfectly understood before Palestine was sur- veyed, and the Norman buildings churches and castles have now been planned and photographed, and many interesting inscriptions were collected from them.
It thus becomes possible to give a picture, both of the country and of its populations, in the twelfth and thirteenth centuries, such as could not formerly be drawn; and, though Rey has done much towards the study of social conditions, the wealth of illustration found in the works of Jeoffrey de Vinsauf,f Joinville, Rubruquis, and others, has not as yet been fully utilised, nor are the peaceful relations between Franks and Orientals generally recognised. These circumstances may perhaps excuse the present attempt to draw a picture of the Latin Kingdom of Jerusalem.