The idealistic reaction against science 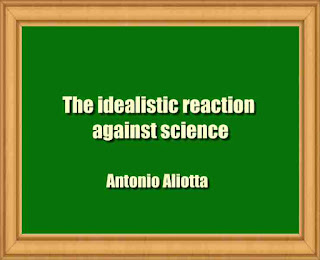 This work must be regarded as a new edition rather than as a mere translation of my book, La Reazione idealistica contro la scienza, published in Italy in 1912 since I have subjected the whole of it to a process of revision with a view to improving it and adapting it to the British public. In the concluding chapter, I have gathered together the constructive portions formerly scattered through the whole book, so as to give greater prominence to my personal point of view, which is a form of spiritualistic realism, and to make that view clearer.
The outlines of a spiritualistic conception of the world sketched therein have already formed the subject matter of three addresses given by me in the Philosophical Library of Palermo, founded by Dr Giuseppe Amato Pojero, a true apostle of philosophy, the study of which he strives to further by both precept and practice.
The line of thought adopted by me that of the school of Francesco de Sarlo and his review, La Cul- tura filosofica, defends the rights of the scientific method and of natural reality against the facile denials of the neo- Hegelians. Idealism, which came into vogue in Italy after the decline of positivism, now appears to be on the wane, and the abuse of the dialectic method has resulted in such a confusion of ideas in mental sciences that Croce himself recently lifted his voice in protest against these exaggerations.
It is now time to return to realism, and in England, America, and Germany there are already indications of such a return, which this work of mine would fain hasten in Italy, where, if absolute idealism has attained a large measure of success, other vigorous and original currents of thought, which have disputed the victory with it, are by no means lacking.
This productive trend of thought, which merits attention in other countries as well as in Italy, is not touched upon in the present volume, because it was not included in the general plan of my work, which does not aspire to be a complete history of contemporary philosophy, but merely a study of one aspect of it, i.e. of the phenomenon of irrationalism in its relations to criticism of science.
Irrationalism, moreover, in spite of the efforts of a few romantic minds, has not taken root in Italy. I shall deal at length with modern Italian philosophy in a separate book, which will also be published in England should the present volume meet with the favourable reception from English readers for which I venture to hope.
the book details : Download 17.5 MB