The direction of human evolution 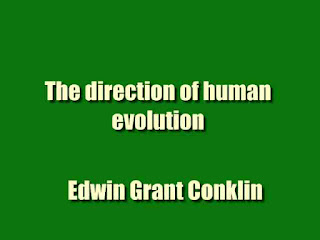 During the past few years, and especially with- in the past twelvemonth, there has been a remarkable recrudescence of the old theological opposition to the theory of evolution, especially as applied '^ to man.
In spite of the great amount of evidence 0which has been accumulating during the past half-century with regard to the evolution of man, it is ' probable that nothing more ignorant, frenzied, or (^ intolerant has ever been uttered against this theory ^ than has appeared during the past year.
No scientific investigator of ten years ago would have thought it possible that the truth or falsity of any scientific theory would ever again be decided by appeals to the Bible, or that an attempt would ever again be made to determine by legislation what might be considered orthodox or heterodox science; and yet this has come to pass.
An organization has been perfected among certain religious denominations for the purpose among other things of banishing modernism and particularly the theory of evolution from churches and schools. Its plan of campaign has been outlined in part as follows: "In order to purify the institution's wher€ modernism is taught we must discipline and reform these institutions. . . .
Our universities, reeking with the unbelief of an evolutionistic false philosophy, are the most dangerous centres in America. . . . Our government has undertaken to regulate business, but the hour has come to regulate our education. . . . The use of the evolutionary hypothesis must be abandoned.
The new theology and modernism must be separated from our institutions of learning. . . . This splendid organization could in all probability succeed in cutting off most of the financial support from these institutions, if not in actually bringing about their total destruction."
Acting upon this last suggestion, bills have been introduced in certain State Legislatures forbidding the teaching of evolution or Darwinism, as applied to man, and in one instance such a bill came within one vote of being passed. Textbooks that teach evolution, even as an incidental part of biology or geology, have been condemned and placed on the index prohibit us of this new Inquisition, and it is said that funds are being raised to endow and make perpetual this fight against evolution. All this is done, we are told, to save the religious faith of the younger generation.

Preface to New Edition v
Preface to First Edition xiii
I. PATHS AND POSSIBILITIES OF HUMAN
EVOLUTION
I. Introduction 3
A. The Law of Continuity 7
B. The Principles of Evolution ... 9
1. evolution is trans-formation and NOT new-formation 9
2. evolution is the transformation of
germplasm and not of developed
BODIES OF animals OR PLANTS . . lO
3. INFLUENCE OF ENVIRONMENT ON EVO-
LUTION II
INHERITANCE OF ACQUIRED CHAR-
ACTERS 13
4. SOCIAL INHERITANCE 14
C The Results of Evolution .... 15
1. diversity 15
2. adaptation 16
3. progress 16
(a) THE paths of progress .... 18
(b) progress most rapid at first. 19
n. The Past Evolution of Man 25
III. Modern Races of Men _„ 31
IV. The Peopling of the Earth 36
V. Hybridization of Races . . . ^ . . 47
VI. Present and Future Evolution of Man, 54
A. Physical Evolution 54
EUGENICS 56
B. Intellectual Evolution 65
C. Social Evolution 69
D. Man's Conquest or Nature . . . .77
VII. Will there Be a Higher Animal than Man? 79
II. EVOLUTION AND DEMOCRACY
The Biological Foundations of Society
A. Physical, Intellectual, Social EvoluTiON NOT Antagonistic.
B. Social Progress Means Greater Specialization and Co-operation
C. Society Founded on Instincts.
II. Progress in Human History . . .
ni. The Biological Bases of Democracy
the book details : Download