The grammar of science 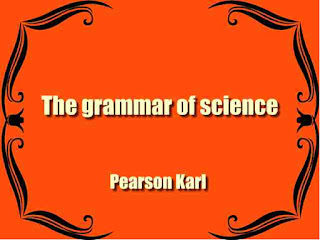 This work has been out of print for some time, and I have long meditated as to whether it was or was not desirable to reissue it. And, if it were desirable, the problem of how it could possibly be done in a manner likely to satisfy the modern reader has raised much doubt in my mind. Reading the book again after many years, it was surprising to find how the heterodoxy of the 'eighties had become the commonplace and accepted doctrine of today.
Nobody believes now that science explains anything; we all look upon it as a shorthand description, as an economy of thought.
Yet in 1885, when in issuing Clifford's Common Sense of the Exact Sciences? I defined mass as a ratio of accelerations, and said that the current definitions of matter and force were un- intelligible, it called forth the most strong protest from more than one distinguished physicist. And, again, the Grammar of Science which first saw the light in 1892  belonged to an age when the leader of British mathematical physicists was confidently asserting that there was nothing he was more sure of than the objective reality of the ether.
It seems almost unnecessary now to republish a book, the lesson of which is that objective force and matter have nothing whatever to do with science,, and that atom and ether are merely intellectual concepts solely useful for the purpose of describing our perceptual routine. Why! the physicists themselves are nowadays almost prepared for each individual observer carrying about his own ether, and are even more certain than the author of the Grammar that ether and atom must account for, but need not obey, the Newtonian mechanics!
What possible purpose, then, can this Grammar serve? Were the author still young and not burdened with many other tasks, a very serviceable function could be performed by showing that the methods of the Grammar extend even further than was indicated in 1892. Beyond such dis- carded fundamentals as " matter " and " force " lies still another fetish amidst the inscrutable arcana or even modern science, namely, the category of cause and effect. Is this category anything but a conceptual limit to experience, and without any basis in perception beyond a statistical approximation?
The very idea will be scouted now, as Professor Tait scouted in 1885 the non-reality of force, or Lord Kelvin later the non-reality of the ether. But the real question is, what will men of science be saying twenty years hence?
They may then recognise that the distinction between the physical and the biological sciences is really only quantitative, and the physicists who now see only absolute dependence or perfect independence may then smile over the penurious narrowness of mathematical function as they smile now over the in- sufficiency of the old laws of motion. Or, again, may there not be some danger that the physicist of today may treat his electron, as he treated his old unchangeable atom, as a reality of experience, and forget that it is only a construct of his own imagination, just so far useful as it describes his experience, and certain to be replaced by a wider concept as his insight expands?
The Grammar would find full scope for its methods had its author had the leisure to rewrite it from the standpoint just indicated. All that it has been possible to do has been to add a chapter indicating what the author thinks to be the expansion taking place in our ideas of causation.
He has further, through the kindness of his colleague, Professor E. Cunningham, been able to include a chapter on Modern Physical Ideas. That chapter indicates, not that the physicists are discovering a new perceptual reality, but that they are seeking a mathematical concept wide enough to describe a much enlarged perceptual experience. It may reasonably be doubted whether they have yet found it.