From liberty to Brest-Litovsk, the first year of the Russian revolution 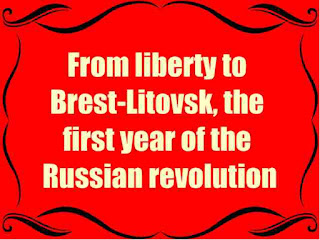 I have tried in this book to elucidate, as far as was in my power, the development of the fundamental ideas of the Socialist parties in the Russian Revolution and their reflection in the life of the masses.
A revolution is a very complex thing, especially in such an immense country like Russia, with its large and varied population, and it goes without saying that, far from claiming to have described it exhaustively, I realise only too clearly that there are numbers of questions on which I have barely touched.
National complications and contradictions, the financial crash, the disorganisation of transport, production and exchange, the agrarian disorders, the food catastrophe that has overwhelmed the North, particularly the towns — at all these things I have merely been able to hint. I have refrained, too, from the temptation to dwell on the external, dramatic side of the Revolution of which I was a witness from day today.
My aim has been to avoid being carried away by my personal impressions and to be as objective as one maybe when writing of the sufferings, the convulsions, and, too often, of the humiliations of one's own people.
These humiliations have been so great, in so fearful, in so criminal a form did the brutality latent in every man display itself at times in the Russian masses, that more than once in the midst of my work I have stopped, doubting whether I ought to continue.
And again I have picked up my pen, for it seemed to me that this terrible lesson had its significance for others besides ourselves. The Socialists have made my country a tremendous experimental station for their dogmas and theories. I know that the best of them sincerely desired to bring happiness to the labouring masses.
They were entranced by the dogmatic illusions of the Internationale and forgot that man is the least known, the least studied of all beings upon the earth, and that the psychology of the individual, still more of the mass, moves byways as yet uncharted, and is guided by forces that elude clear apprehension.
And for this reason, bitter though the truth about the Russian Revolution maybe, I have felt that we must have the courage to tell it. I trust that the tragic lessons of a strange far-away land and the insane and criminal Socialistic experiments of the Maximalists may serve as a stern warning for other peoples. It is worthwhile for those who are struggling to secure for mankind happier and more worthy conditions of life to read attentively the blood-stained pages of the Russian Revolution.
If they realise what our mistakes were, what were our delusions and our crimes, and if, avoiding these, they find other ways surer and less cruel, then we Russians will have at least this consolation that the immeasurable sufferings of Russia are a historical sacrifice offered for the sake of a brighter future for mankind. Who knows? Perhaps the path to truth leads only through suffering that cleanses and ennobles. London, April 1919.
the book details : Download  17.9 MB