The ethic of freethought and other addresses and essays 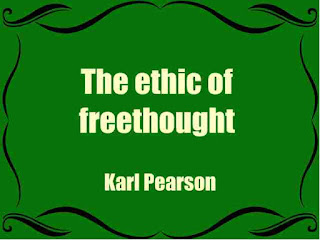 I have allowed the original preface to this work, as well as one or two essays, to be again reprinted with but slight revision, not because they express exactly what I think today, but because read together they may explain to some readers the circumstances, partly historical and partly personal, under which these lectures and essays were written.
During the years 1880 and 1881 comparatively few lectures on Socialism were to be heard at working men's clubs, and I well remember what curious questions would then be put as to the teaching of Lassalle and Marx. The last twenty years have changed this entirely — one of the chief features being the excellent educational work of the Fabian Society. Twenty years ago the discussion of sex problems was equally unusual. Now a considerable literature on the subject has sprung into existence. Occasionally we come across a morbid outgrowth, but on the whole, what has been written is thoughtful, wholesome, and sane in its conclusions.
The fourteen years which have elapsed since the first edition of this work may be looked upon by the social reformer as years of steady, if somewhat slow, progress. The problems of labour and of sex arc now recognised as the problems of our generation, and the discussion of them, so recently held in bad repute, appears likely to be soon a mark of fashion.
Freethought the advance has been real, but it is far less apparent. Freethinkers act too much as units ;
what we need today is a Society of Freethinkers, which might easily do the same good work now, that the Society of Friends did of old, and that the Unitarians and Positivists did as they, in turn, came to stand in the front rank of intellectual progress.
The importance of such a union is much emphasised by the recrudescence of theological disputation, the renewed outbreak of " reconciling " metaphysics, the successful attempts to evade the spirit of the Tests Act, and the revival of various forms of superstition under the names of theosophy and " Christian science." In view of these by no means negligible signs of at least a transitory reaction, the republication of this Ethic of Freethought may not seem to come without its justification. I have to thank heartily my friend Dr. W. E. Macdonell for reading the proofs and pointing out to me many inaccuracies and blunders.

FREETHOUGHT
1. The Ethic of Freethought
2. Matter and Soul
3. The Prostitution of Science
4. The Ethic of Renunciation.
5. The Enthusiasm of the Marketplace and of the Study
II. HISTORY
6. Maimonides and Spinoza . . . . . .'125
7. Meister Eckehart the Mystic 143
8. Humanism in Germany . . . . . . .161
Note on Jacob "Wimpfeling . . . .185
9. The Influence of Martin Luther on the Social and
Intellectual Welfare of Germany . . .193
10. The Kingdom of God in Munster .... 246
III. SOCIOLOGY
11. The Moral Basis of Socialism
12. Socialism in Theory
13. The Woman's Question
14. Sketch of the Relations of Sex in Germany
15. Socialism and Sex
Karl Pearson FRS FRSE was an English mathematician and biostatistician. He has been credited with establishing the discipline of mathematical statistics
the book details : Download 11.9 MB