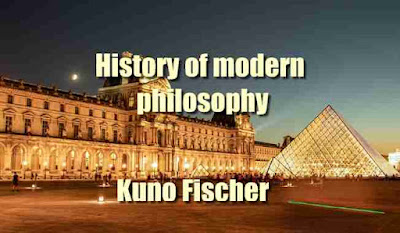 Descartes And His School

The Author will illustrate the history of Modern Philosophy and its problem and then will move to everything about Descartes doctrine and school.
From the editor Noah Porter's introduction:
Among the many histories of .philosophy for which we are indebted to modern research, the history of Modern Philosophy by Professor Kuno Fischer of Heidelberg is conspicuous for the courage with which the author deals with the difficulties of his task and tlie success with which he overcomes them.
Though he is by no means removed from criticism or controversy in respect to the interpretation which he gives of the writers and schools which he encounters, and in the positive and pronounced estimates and criticisms which he does not hesitate to give of their leading positions, he is uniformly clear, spirited, and exhaustive.
He is also popular in the best sense of the term, being neither technical nor abstract beyond the necessities imposed by his theme and connecting with the thorough and masterly discussion of schools and opinions as much of personal and general historic interest as could be expected or desired. For these reasons his history is, perhaps, more readable than any other, and is uniformly confessed by competent critics, whether friendly or otherwise, to be eminently attractive and exciting to the general student.
Hitherto only a small portion of this history has been translated into English, — for one reason among others, that the history itself is not yet complete, having as yet been finished to the end of Schelling's system and life, where it rests for obvious reasons with the author's unsatisfied desire satisfactorily to expound the development of the Hegelian theory of Being and of Knowledge, ^leanwhile the result of his attempt to do this is awaited with more than ordinary interest by both the disciples and antagonists of Hegel and his critics.
During this interval, there seems to be no reason why the earlier portion of this history should not be given to the English public, especially when we consider that the history of the school of Descartes, in many senses, and especially as treated by our author, stands by itself, and holds closer relations to all the forms of modern speculation than is commonly supposed. It should be remembered also, that this portion of the history has meanwhile passed to a third edition, and been carefully elab- orated by the author.
The general Introduction will be found to possess an independent interest. For these reasons the publishers have decided to publish in two separate volumes a translation of that portion of this history which treats of Descartes and his school (including Spinoza), leaving the question at present undecided whether they shall publish the remainder of the history, being satisfied that the volumes which they offer to the public will, in any event, constitute a valuable addition to the library of the student of modern philosophy, which will, in an important sense, be complete by itself.
They are assured that the translation has been made by a competent German scholar, who, in addition to his knowledge of the German language and his familiarity with German philosophy, has had the very great advantage of giving the study of several months to the critical study of the school of Descartes previously to undertaking this translation.
Excerpt from the author introduction:
The first volume of this work has been out of print for some time. I have been unable to complete a thorough revision of it until during the present year, and I here present it in a third edition. When I published the second edition, I had written my history of modern philosophy as far as Kant. Since then, I have added Fichte and his Predecessors, and Schelling and his Period. Hegel, his School, and his Opponents, and the course of development of philosophy since Hegel, are still lacking. On account of the great difficulty of the subject,
I have been obliged, for the sake of clearness, to treat it in such detail that the size and expensiveness of the work have increased beyond what I intended. For it is impossible to estimate the difficulties of one's own work until one has realized them and sought to overcome them.
And if he should be so fortunate as to travel the toilsome road a second time, he will have acquired the strength to advance more easily and rapidly, as is often the case with long and fatiguing journeys. Brevity without injury to clearness is possible only after the most detailed exposition.
The size of the work in this new edition will be diminished by the more compact form in which the matter is printed. I seek to comply with this just desire of my publisher, while I oppose every kind of abridgement that is unfavourable to clearness.
With my method of exposition, I cannot attain brevity by omissions, but only by a corresponding treatment of all the various ports of the whole. This was one reason for this new revision and is an essential part of it. It also seemed desirable to enlarge the introduction, especially the sections treating the Renaissance and the Reformation: besides, it appeared necessary to add the results of recent investigations concerning Descartes.
The stand-point and arrangement of the work are unchanged. It is unnecessary to repeat in the preface what is shown in the work itself. When the third edition of work so extensive and expensive as the present is called for, I can venture, with some satisfaction, to regard it as proof that it has been of some service in the instruction of my contemporaries.