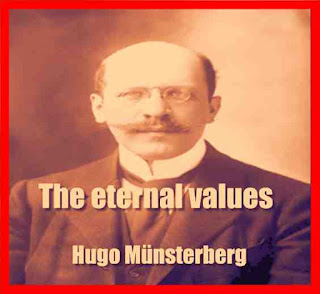 This is the first time that I have ventured to write a book in both English and German. So far the author in me has presented a case of double personality. For many years the one person has written English, but has published only light books and essays; all that time the other person has written in German but has insisted on writing scholarly papers and systematic works. The one tried to address a wider public; the other sought only the ear of the scholar.
Neither knew what the other was doing. In this way, my publications of the last year were again divided. When I wanted to discuss popularly the relations of psychology to law and to medicine, the American in me came to the front and wrote in light vein "On the Witness Stand" and "Psychotherapy." But when the philosophical striving of my whole life had led me to a new idealistic standpoint from which I saw the ultimate problems of the world in a new light, it seemed only natural that the German in me should say it in his mother tongue and with the seriousness of scholarly formulation.
The product was my " Philosophie der Werte." Yet the hardly expected warmth of welcome which the volume found in wide spheres soon suggested to me that after all the task of the book was not only to address scholars who do not care in what language a book is written. Far beyond the circle of philosophers it was greeted as an expression of the new desires of our time, which seeks its own understanding of life and world, and is tired of the mere naturalism and positivism and scepticism and pragmatism of the past decades.
The ethical idealism of the book seemed to touch the most widely different layers of the community. That suggested the hope that the book might fulfil a similar mission in the world of American thought and here too might help to liberate from the ghosts of the past. Therefore I undertook for the first time the translation of a book of mine.
Yet this volume can hardly be called a translation. Much in this English version is newly added and much is omitted from the previous text. Many side issues, especially such as connected the work with particular German movements, are entirely left out, and not a few additions refer to recent American discussions. Other parts are greatly condensed.
While in this way the book has become almost a new one, I have not altered its external shape: the form of a philosophical system. It would not have been difficult to remove these sharp boundary lines and to resolve systematic separations into looser forms, more attractive to the casual reader. I have not yielded to this temptation because I sincerely believe that too much in the American method of philosophizing has become antagonistic to the real character of philosophy.
More and more the aim seems to be the writing of philosophy in brilliant epigrams and clever discussions. Especially our younger philosophers dash down their thoughts in an impressionistic style that captivates and does not need the slightest effort to follow. Who will doubt that such picturesqueness is stimulating and attractive? Yet after all it is serving the ultimate purpose of knowledge no better than picturesque and epigrammatic mathematics or chemistry. Philosophy is a movement of thought which demands the thoroughness of the expert, and which can be followed only with concentrated attention. Everything de- pends upon inner consistency, and only a closely knit system can secure it. In all times only such systems have marked the great periods of philosophical insight.
This must not be misunderstood. First, it does not mean that the philosophical understanding of the world should lead us away from the reality of life and should rely on metaphysical speculations. On the contrary, this world of our real life is the material of our philosophical effort. In the following volume, the last chapter alone faces metaphysical problems.
The discussion on truth and beauty, on happiness and love, on science and art, on development and progress, on industry and law, on morality and religion, fills the bulk of the book and is not at all metaphysical.
It aims to grasp our real experience in its original fulness and in its true significance. Every line of those chapters might be accepted even by those who see other ways of solving the metaphysical problem. Moreover, insisting on the difficulty of the philosophical task must not be misunderstood as if it pleaded for a philosophical "art for art's sake."