History of epidemics in Britain 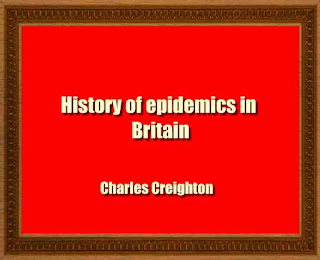 The sources of the work have been the ordinary first-hand sources of English history in general. In the medieval period, these include the monastic histories, chronicles, lives, or the like (partly in the editions of Gale, Savile, Twysden, and Hearne, and of the English Historical Society, but chiefly in the great series edited for the Master of the Rolls), the older printed collections of State documents, and, for the Black Death, the recently published researches upon the rolls of manor courts and upon other records. From near the beginning of the Tudor period, the Calendars of State Papers (Domestic, Foreign, and Colonial), become an invaluable source of information for the epidemiologist just as for other historians.
Also, the Reports of the Historical Manuscripts Commission, together with its Calendars of private collections of papers, have yielded a good many facts. Many exact data, relating more particularly to local outbreaks of plague, have been found in the county, borough, and parish histories, which are of very unequal value for the purpose and are often sadly to seek in the matter of an index.
The miscellaneous sources drawn upon have been very numerous, perhaps more numerous, from the nature of the subject, than in most other branches of history. Medical books proper are hardly available for a history of English epidemics until the Elizabethan period, and they do not begin to be really important for the purpose until shortly before the date at which the present history ends.
These have been carefully sought for, most of the known books having been met with and examined closely for illustrative facts.
In the latter part of the seventeenth century the best English writers on medicine occupied themselves largely with the epidemics of their own time, and the British school of epidemiology, which took a distinguished start with Willis, Sydenham and Morton, was worthily continued by many writers throughout the eighteenth century; so that the history after the period here treated of becomes more and more dependent upon medical sources, and of more special interest to the profession itself Reference has been made not infrequently to manuscripts; of which the more important that have been used (for the first time) is a treatise on the Sweating Sickness of 1485 by a contemporary physician in London, two original London plague- bills of the reign of Henry VI IL, and a valuable set of tables of the weekly burials and christenings in London for five years (almost complete) from 1578 to 1583, among the Cecil papers — these last by kind permission of the Marquis of Salisbury.
Collecting materials for British epidemiology from these various sources is not an easy task; had it been so, it would hardly have been left to be done, or, so far as one knows, even attempted, for the first time at so late a period.
Where the sources of information are so dispersed and casual it is inevitable that some things should have been overlooked: be the omissions few or many, they would certainly have been more but for suggestions and assistance kindly given from time to time by various friends. The materials being collected, it remained to consider how best to use them.
The existing national epidemiologies, such as that of Italy by Professor Corradi or the older ' Epidemiologia Espanola' of Villalba, are in the form of Annals. But it seemed practicable, without sacrificing a single item of the chronology, to construct from the greater events of sickness in the national annals a systematic history that should touch and connect with the general history at many points and make a volume supplementary to the same. Such has been the attempt; and in estimating the measure of its success it may be kept in mind that it is the first of the kind, British or foreign, in its own department.
The author can hardly hope to have altogether escaped errors in touching upon the general history of the country over so long a period, but he has endeavoured to go as viii Preface. little as possible outside his proper province and to avoid making gratuitous reflections upon historical characters and events. The greater epidemic diseases have, however, been discussed freely — from the scientific side or from the point of view of their theory. It remains to acknowledge the liberality of the-Syndics of the Cambridge University Press in the matter of publication, and the friendly interest taken in the work by their Chairman, the Master of Peterhouse.
the book details : Download 17 MB