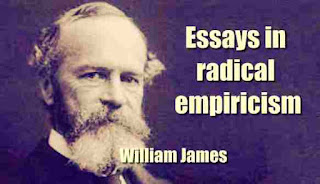 From Editor's preface
The present volume is an attempt to carry out a plan which William James is known to have formed several years before his death. In 1907 he collected reprints in an envelope which he inscribed with the title  Essays in Radical Empiricism, and he also had duplicate sets of these reprints bound, under the same title, and deposited for the use of students in the general Harvard Library, and in the Philosophical Library in Emerson Hall.
Two years later Professor James published The Meaning of Truth and A Pluralistic Universe, and inserted in these volumes several of the articles which he had intended to use in the * Essays in Radical Empiricism.' Whether he would nevertheless have carried out his original plan, had he lived, cannot be certainly known. Several facts, however, stand out very clearly. In the first place, the articles included in the original plan but omitted from his later volumes are indispensable to the understanding of his other writings.
In preparing the present volume, the editor has therefore been governed by two motives. On the one hand, he has sought to preserve and make accessible certain important articles not to be found in Professor James's other books.
This is true of Essays I, II, IV, V, VIII, IX, X, XI, and XII. On the other hand, he has sought to bring together in one volume a set of essays treating systematically of one independent, coherent, and fundamental doctrine.
To this end it has seemed best to include three essays (III, VI, and VII), which, although included in the original plan, were afterwards reprinted elsewhere; and one essay, XII, not included in the original plan. Essays III, VI, and VII are indispensable to the consecutiveness of the series and are so interwoven with the rest that it is necessary that the student should have them at hand for ready consultation. Essay XII throws an important light on the author's general * empiricism,' and forms an important link between * radical empiricism' and the author's other doctrines.