A history of economic doctrines 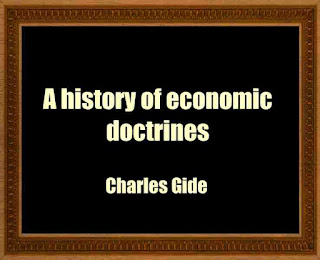 from the time of the physiocrats to the present day

Gide's Principles of Political Economy, of which there are several translations, is probably better known to English students than any similar work of foreign origin on the subject, and many readers of that book will welcome an opportunity of perusing this volume which Professor Gide has produced in collaboration with Professor Rist.
The remarkable dearth of literature of this kind in English may be pleaded in further extenuation of the attempt to present the work in an English garb, and readers of the Preface will be able to contrast the position in this country with the very different condition of things prevailing across the Channel.
The contrast might even be carried a stage farther, and it would be interesting to speculate upon the historical causes which have made Germany supreme in the field of economic research and history, which influenced France in her choice of the history of theory, and which decreed that England should, on the whole, remain faithful to the tradition of the " pure doctrine." Can it be that something like a " territorial division of labour" applies in matters intellectual as well as economic? Be that as it may, we can hardly pretend to be satisfied with the position of our country in this matter of doctrinal history. Of the nine names mentioned in the Preface, only two are English, namely,
Ashley and Ingram; and it is no disparagement to Ashley's illuminating study of mediaeval England to say that the main interest of his work is not doctrinal and that Cunningham's name might with equal appropriateness have been included in the list.
Omitting both Ashley and Cunningham, whose labours have been largely confined to the realm of economic history, we are thus left with Ingram's short but learned work as the sole contribution of English scholarship to the history of economic thought.
English readers may possibly be puzzled by the omission of any references, except a stray quotation or two, to Cannan's History of the Theories of Production and Distribution. But the microscopic care with which the earlier theories are examined and elucidated in that work has resulted in its being regarded as a most valuable contribution to the economic theory itself, and under the circumstances, the absence of any reference to it in the Preface is not altogether surprising.
Our apparent indifference to the development which theory has undergone in the course of the last 150 years is all the more difficult to explain when we recall the fact that England has always been the classic home of theory, both orthodox and socialist, and our backwardness in this respect contrasts very unfavourably with the progress made in the kindred study of economic history during the last twenty-five years under the inspiration of writers like Ashley, Cunningham, Maitland, Round, and Seebohm.
Most critics are by this time agreed that Ingram's work, lucid and learned though it is, is somewhat marred by being written too exclusively from the standpoint of a Positivist philosopher who thought he saw in the rapid rise of the Historical school an indisputable proof of the soundness of the Comtean principles and a presage of their ultimate triumph.
Complete impartiality in the writing of history, even were it attainable, may not be altogether desirable, and the present authors have hastened to disclaim any such qualification. Notwithstanding this, some of their readers will possibly feel that certain French Schools, both ancient and modern, have been dealt with at disproportionate length, and that scarcely enough attention has been paid to certain English and American writers. But it will surely do us little harm occasionally " to see ourselves as others see us."
The chief interest of the present volume will probably be found to consist in the attempt made to give us something like a true perspective of certain modern theories by connecting them with their historical antecedents; we can imagine its later pages being scanned with a great deal of justifiable curiosity. After all, the verdict of history upon the achievements of Smith, the measure of his indebtedness to his immediate predecessors, and the extent to which the " car of economic progress " was accelerated or retarded in its movements at the hands of Ricardo and his contemporaries is fairly well established by this time.
On one point only do the present writers seem to challenge that verdict, namely, in their designation of Ricardo and Malthus as Pessimists. It is otherwise with the more modern writers, however. Their work has not the distinctness of that of the earlier writers, partly because we are not sufficiently removed from it as yet, and partly because some of it is obscured by the haze of party strife.
But it may help us to a better understanding of their relative positions to learn, for example, that the Historical school, which set out on its career of conquest with a considerable flourish of trumpets, has not yet succeeded in giving us a new science of Political Economy; that the Marxian doctrine is already antiquated, in the opinion of certain members of that school; that the Socialism of the Fabian Society is merely a recrudescence of Ricardian economics, and that Anarchism is nothing but a violent form of Liberalism.
I cannot hope to have succeeded in retaining in this translation the freshness and vivacity of the original. But I have endeavoured to make the rendering as accurate as possible; and with this object, in view, considerable trouble has been taken to verify the quotations. As the title page implies, the work was originally begun at the suggestion of the late Professor Smart of Glasgow, and today more than ever I am conscious of what I owe to his kindly criticism and genial encouragement.
the book details : Download 32 MB