Determinism and freedom in the age of modern science 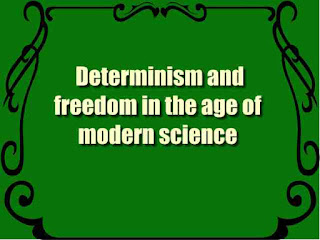 The New York University Institute of Philosophy is an experiment designed to further fruitful discussion in philosophy. The annual regional meetings of the American Philosophical Association perform an excellent and indispensable professional function. But because of the large number of persons involved, the broad scope of the programs, and the adherence to fixed time schedules — natural limitations of all gatherings of this kind — it seems desirable to multiply opportunities for free and sustained interchange of views.

Toward this end, we, therefore, resolved to try something new: to select one philosophical topic or theme for intensive discussion by a small group of philosophers and other scholars and thinkers deeply concerned with it, and willing to explore it together around a long seminar table. We hope our action will inspire similar efforts in other regions of the country. Our great problem was to keep the number of participants within a reasonable compass without making invidious distinctions. No inference is to be made as to a philosopher's eminence or professional qualification to analyze the theme under discussion on the basis of his absence from this Institute. For obvious reasons, geographical considerations played a large role.
Nonetheless, we hope to establish a revolving membership for our Institute so that before long all philosophers with a strong interest in the themes under discussion and within easy travelling distance from New York City will on one or another occasion join us as participants in the Institute. On the other hand, the choice of a theme for our first Institute was not very much a problem "Determinism and Freedom" is not only a perennial philosophical issue but seems today to be moving once more into the forefront of intellectual concern. For example, almost contemporary with our Proceedings, the January 1957 issue of Mind contains two long articles on the subject, and the issue before that includes a piece in which it is argued that the entire notion of "moral responsibility" is moribund and should be extruded from the vocabulary of intelligible expressions. ^ Our theme was selected long before these and similar articles appeared.
The first is political and social. Whereas in the past the ex- tension of the deterministic philosophy in the natural sciences was hailed as a support of human freedom because it increased man's power of control over nature, today belief indeterminism in the social sciences and social affairs is feared by many because it increases the power of men to control other men. Some individuals confess that it is not only Or- well's scientifically controlled 1984 that causes their hackles to rise in fear but even the picture of comparatively sunny communities like that drawn in Skinner's Walden II. In some quarters this reaction has gone so far that even the term "planning" and the notion of a "planned society," which a short generation ago was the hallmark of rational social philosophy, are viewed with suspicion as suggesting, if not evidencing, a conspiracy against human freedom.
The second reason for a revival of interest in our theme is that in the very stronghold of traditional determinism, the natural sciences, the field in which determinism celebrated its greatest triumph, the belief in the doctrine or postulate of universal determinism seems to have been surrendered in an effort to understand the world of subatomic behaviour.
The actual relevance of these glad tidings to the momentous issues of human freedom and responsibility remains to be established. But in the writings of several eminent scientists, it has been eloquently proclaimed. The third reason for the actuality of our theme derives from the growth of interest in modern psychology, psychiatry, and psychoanalysis in all their scientific and mythological forms. The apparent upshot of the acceptance of determinism in explaining the human psyche is the belief that the more we learn about a man's past history, the less he seems responsible for his present behaviour.
This conclusion has affected thinking and practice in law, pedagogy, and social work, and has produced something of a revolution in penology. Sometimes its proponents rather inconsistently blame us for blaming Hitler and Stalin for the crimes they voluntarily committed, on the ground that since Hitler and Stalin were once babies — hard as it is to imagine — they must have inherited or acquired the complexes and obsessional drives that caused them to do what they couldn't help doing. Even when pruned of inconsistency, this argument threatens to produce a revolution in moral theory by asserting that the concept of moral responsibility is completely vacuous.
The strategy of our discussion is to begin with an analysis of the general concept of determinism, to proceed to the notion of determinism in physics, and to conclude with a discussion of freedom and responsibility in law and ethics. The papers of the readers and selected commentators are here reproduced substantially in the form in which they were presented to the Institute. Most of the other comments by participants in the Institute are elaborations of comments and criticisms made after the papers were presented. Some of the comments are a result of post-Institute reflection on the spirited give and take among the participants, which technical difficulties prevented us from reproducing in their entirety.
the book details : Download