A defence of Aristocracy 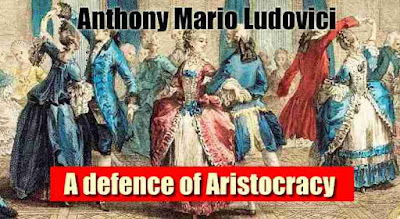 In three books published during the last five years, the subject of Aristocracy has already formed no insignificant part of my theme, and in my last book, it occupied a position so prominent that most of the criticism directed against that work concerned itself with my treatment of the aristocratic standpoint in Art. Much of this criticism, however, seemed to be provoked by the fact that I had not gone to the pains of defining exhaustively precisely what I meant by the true aristocrat and by the true aristocracy in their relation to a people, and in the present work, it has been my object not only to do this, and thus to reply to my more hostile critics, but also to offer a practical solution of modern problems which is more fundamental and more feasible than the solution offered by either Democracy or Socialism.
n view of the deep discontent prevailing in the modern world, and of the increasing unhappiness of all classes in Western Europe, it is no longer possible to turn a deaf ear even to the Socialist's plea for a hearing, and thousands of the possessing classes who, prompted by their self-preservative instinct alone, still retort that Socialism is an impossible and romantic Utopia, are beginning to wonder secretly in their innermost hearts whether, after all, this "vulgar" and "proletarian" remedy is not per- haps the only true and practical solution of modern difficulties.
Having no other solution to offer, they are beginning to ask themselves, in private, whether this may not be the best way of extricating modern humanity from the tangle of exploitation and privilege, oppression and luxurious hedonism, in which they — the top-dogs — seem to be, but accidentally, the favoured few.
In their conscience, they find no deep reply to Socialism, although their natural longing to hold what they possess forces them to cast ridicule and odium upon it. Now, in the present work, I outline the terms of a reply to Socialism and Democracy which I venture to hope is deeper than that usually made by their opponents. I offer a solution that I believe to be more funda^iental, more consonant with the passions and foibles of human nature, more practical, and above all more vital and full of promise for the future, than anything Socialism or Democracy does and can bring forward.
I have entered exhaustively neither into the Democratic nor into the Socialistic solution of modern evils, but have confined myself closely to the statement of the true aristocrat's position, leaving the reader to see how fundamentally such a statement upsets the claims of both of the other parties. Thus the book is not merely an argument in defence of true aristocracy; for, to all thinking men, who know it needs no defence, such an argument alone would be simply platitudinous.
It is, in addition, an attempt at showing wherein hitherto the principles of a true Aristocracy have been misunderstood by the very aristocrats themselves, and that more than half the criticism directed against the Aristocratic principle today no more applies to a true Aristocracy than it does to the man in the moon. I have called attention to a political and historical fact which too many writers appear to have overlooked: the fact that all political struggles, and all the fluctuations of fortune which have attended the history of aristocracies, have not consisted actually of a struggle between the principle of aristocracy and a better, nobler and more desirable principle, which by its superior virtues has supplanted the former, but of a struggle between the principle of aristocracy and its representatives, or, in other words, of Aristocracy versus the Aristocrats.
My conclusion that Aristocracy means Life and that Democracy means Death reveals at once the object with which I undertook to investigate this problem — that is to say, with the object of raising the controversy if possible to a plane higher than mere " matters of opinion " and mere political party; and the impartiality with which I have pointed the finger at the errors and general income pretence of a particular Aristocracy should be sufficient to prove the non-political and non-party spirit with which I entered upon the investigation.
The two chapters devoted to Charles I and the Puritan Rebellion, respectively, may seem to some a little irrelevant in a book of this nature; but when it is remembered that I needed a convincing example of the divergence of bad taste from good taste, -and that this particular divergence of bad taste from good represents the most imposing instance of the kind which the history of England records — so much so, indeed, that the act of murder committed in 1649 may be regarded as a decisive turning-point in the fortunes of the English people, and a choice of roads which has undoubtedly led to all the evils concerning the origin of which most of us are now consciously or un- consciously inquiring — this excursion into the records of the past, and particularly into the records of the seventeenth century, will perhaps appear more justified and indispensable.

CHAPTER I
The Aristocrat as the Essential Ruler . . . i
An Introduction to some of the fundamental attributes of the
Ruler-man.
CHAPTER II
The English Aristocrat as a Failure in the Art of
Protecting and Guiding the Ruled ... 31
An analysis of the part played by the English Aristocrat in the
growth of the Industrial System and its evils.
CHAPTER III
The English Aristocrat as a Failure in the Tutorship oF Ruling. 77
An analysis of the part the English Aristocrat has played in caring, or rather not caring, for the "heart of the people" since the beginning of the Industrial movement.
CHAPTER IV
Puritanism, Trade and Vulgarity, . . .103
The turning point in English history. Charles I, the last to make a stand against the influences and tendencies which ushered in the present Age, our Age.
CHAPTER V
The Metamorphosis of the Englishman in the Seven-teenth Century 165
The exposure of a pious fraud. The Puritan as a moulder of men. The Englishman of the seventeenth century transformed and prepared for the shop counter, the office stool, the factory and the forge.
the book details : Download 10.8 MB