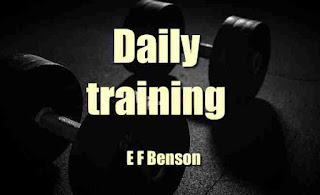 The following pages contain certain rules and suggestions concerning health, and certain simple and sensible ways in which it may, we hope, be acquired and maintained at a very small expense of time and self-denial, by a large number of people who are naturally accustomed to feeling not very well.
The book is founded on notes made by its two authors who, though they lead for the most part very different lives, are agreed on certain broad principles of health herein set forth. One of them, for instance, eats largely of flesh-foods every day, the other has scarcely touched meat for years. But both are accustomed to feeling extremely well and to undertake considerable exertion either of mind or body without experiencing any fatigue.
One of them takes regular exercise, that is to say, he plays an outdoor game on most days of his life, while the other who abstains from flesh-foods has little practice of the sort. He will take no out-of-door exercise for several days, work very hard, and,§nd himself perfectly fit for some severe physical test at the end. But they are both agreed that if the one abandoned flesh-foods (which he does not propose to do) he would cease to require regular exercise and that if the other took flesh-foods (which he does not propose to do) he would not only be very ill but would also require regular exercise.
One again is seldom seen without some appliance of tobacco in his mouth, because he finds it agreeable and after an experiment of abstinence from it found that it did not make any difference, as far as he could make out, in his general health. The other never smoke at all.
One again takes a cold bath in the morning, the other a hot one followed by cold sponging. But both are absolutely in accord on far more main points than those on which their practice, at any rate, differs, and they have found it perfectly easy to write this book together without wrangling, on which account they wish to express a pious hope that the very fact that they differ in so many things may have saved them from dogmatism.
For it has helped them to realize that even when they are agreed on any point it would be sheer stupidity to hint that they were therefore right, and in consequence they only put forward the points on which they are agreed as suggestions, hoping that others after trial may also agree with them. Universal laws on an empirical matter like health are rare, and the constitutions of men are various. One man's meat, in fact, is literally another man's poison. But in the main, the two authors are agreed. They believe that the majority of mankind habitually eat too much and habitually take too much stimulating food and drink. They believe also that most people who do so do not take enough exercise, and that either an increase of exercise or a decrease of stimulants is needed.