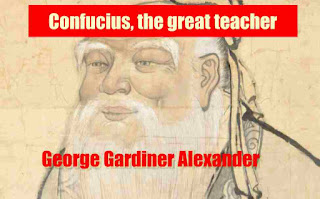 Scholar work
In the following pages, I have endeavoured to bring together, in the compass of a single volume, and in the form which would be most likely to interest the general reader, a rhtim^ of all that concerns the life, times, and teaching of the great Chinese philosopher, Confucius.
I have occasionally included in the details of his life incidents which are legendary, rather than historical, for the reason that, had I discarded them, I should have deprived the reader of many striking illustrations of his character, and of the manners, and of the mode of thought, belonging to the time in which he lived; and in doing this I have only followed the example of many preceding writers, amongst whom are to be enumerated such high authorities as M. Gauthier and the Jesuit Father P. Amiot.
In the various extracts from Chinese sources, I  have sometimes found it necessary to alter the terms in which they had been translated, in order to incorporate within them the explanations given in notes, ' and the better to bring them into harmony with the object of this work, as well as to make them more capable of being understood when produced as isolated passages; but I have, for this reason, more frequently preferred an adaptation from some purely literal translation, whilst in not a few instances I have gone at once to the original Chinese text.
My great object in every case, in addition to that which has been already stated, has been to place the subject before the reader in language which, whilst preserving a correct idea of the meaning of the original, would be most appropriate to the period of the composition, and to the circumstances under which it was written. I am supported in my idea of the necessity of substituting a free rendering, approaching in many cases to a paraphrase, for a close literal translation of the ancient literature of China, by no less an authority than that of the Professor of Chinese in the University of Oxford, Dr. Legge, whose translations of the sacred books, written for scholars rather than for the general public, have put him at the head of our English translators.
Dr Legge says, in the preface to his translation of the "Yih-King," published in 1 882, " The written characters of the Chinese are not representations of words, but symbols of ideas and the combination of them in a composition is not a representation of what the author would say, but of what he thinks. It is in vain, therefore, for a translator to attempt a literal version. When the symbolic characters have brought his mind en rapport with that of the author, he is free to render the ideas in his own or any other speech, in the best manner he can attain to."
It will be seen that this work has no pretension to being a book written by a scholar for scholars. But it has not been lightly undertaken, nor have any efforts been spared, to overcome the many difficulties by which its execution has been surrounded.
The greatest of these difficulties proceeded from the circumstance that amongst the most advanced students of Chinese, a great diversity of opinion exists as to the correct rendering of many passages — often amongst the most important — in the classical writings. Of course in such cases, I have had to choose between conflicting authorities and to select the rendering, which, after careful comparison and a reference to the Chinese text, was, to my mind, the one, in closest accord with the context, and with the general process of the line of thought of which it formed a portion.
The inception of the work dates from the time — now more than forty years ago — when the Confucian writings became part of my course of study when endeavouring to gain knowledge of the Chinese language and literature during a period of service in China. In old age one reverts a premiers amours^ and hence this book is submitted to the indulgent suffrage of the public, in the sincere hope that it may be of some little use in extending amongst us a knowledge of the people of another great empire, the confines of which have now become contiguous to our own.
the book details : Download 10 MB