The confessions of al Ghazzali 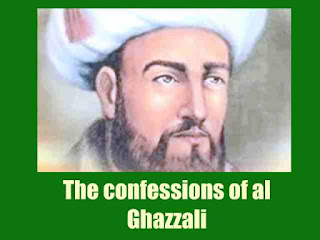 Contents:
introduction 7
Ghazzali's Search for Truth . . . . .11
The Subterfuges of the Sophists . . . .15
The Different Kinds of Seekers after Truth. 20
The Aim of Scholastic Theology and its Results.21
Concerning the Philosophical Sects and the Stigma of Infidelity which attaches to them all... 25
Divisions of the Philosophic Sciences . . .27
Sufism 41
The Reality of Inspiration: its Importance for the Human Race... 50
From the introduction:
Abou Hamid Muhammed ibn Muhammad Al Ghazzali was born in the city of Tus in Khorassan, a.d. 1058, one year after the great poet and freethinker Abu' 1' Ala died. He was the son of a dealer in the cotton thread (Gazzal), whence his name. Losing his father in early life, he was confined to the care of a Sufi, whose in- fluence extended through his subsequent career. On finishing his studies he was appointed professor of theology at Bagdad. Here he achieved such splendid success that all the Imams became his zealous partisans. So great, indeed, was his renown, so ardent the admiration he inspired, that the Muhammedans sometimes said: "If all the books of Islam were destroyed, it would be but a slight loss, provided Al Ghazzali' s work on the Revivification of the Sciences of Religion were preserved."
The following short treatise gives the history of the mind of this remarkable man in his pursuit of truth. It might not inaptly bear the title " Confessions of an Inquiring Spirit." In its intellectual subtlety, it bears a certain resemblance to Newman's Grammar of Assent, and in its almost Puritanical sense of the terrors of the world to come, it is akin to Bunyan's Grace Abounding. It is also interesting as being one of the very few specimens of genuine Eastern autobiography.
the book details : Download 1.8 MB