The comic history of Rome 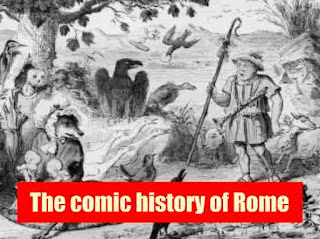 Some explanation is perhaps due from a Tvriter who adopts the title of Comic in relation to a subject which is ordinarily considered to be so essentially grave as that of History. Though the epithet may be thought by many inappropriate to the theme, this work has been prompted by a very serious desire to instruct those who, though willing to acquire information, seek in doing so as much amusement as possible.
It is true that professedly Comic literature has been the subject of familiarity not unmixed with contempt on the part of a portion of the public since that class of writing obtained the popularity which has especially attended it within the last few years; but as whatever disrepute it has fallen into is owing entirely to its abuse, there is no reason for abandoning an attempt to make a right use of it.
The title of Comic has therefore been retained in reference to this work, though the author has felt that its purport is likely to be misconceived by many, and among them not a few whose judgment he would highly esteem, who would turn away from a Comic History solely on account of its name, and without giving themselves the trouble to look into it.
Those persons are, however, grievously mistaken who have imagined that in this, and in similar books from the same pen, the object has been to treat History as a mere farce, or to laugh at Truth — the aim of the Avriter having invariably been to expose falsehood, and to bring into merited contempt all that has been injudiciously, ignorantly, or dishonestly held up to general admiration. His method of telling a story may be objected to; nevertheless, if he does his utmost to tell it trul}-, he ought not, perhaps, to be very severely criticised for adopting the style in which he feels himself most at home; and if his opinions are found to be, in the main, such as just and sensible persons can agree with, he only asks that his views and sentiments may be estimated by what they contain, and not by any peculiarity in his mode of expressing them.
The writer of this book is animated by an earnest wish to aid, as far as he is able, in the project of combining instruction with amusement; and he trusts he shall not be blamed for endeavouring to render such ability as he possesses available for as much as it is worth, in applying it to subjects of useful information.
Those who are not disposed to approve of his design will perhaps give him credit for his motive and he may with confidence assert, that, from the care and attention he has bestowed upon this work, it will be found to form (irrespective of its claims to amuse) by no means the least compendious and correct of the histories already in existence of Rorne to the end of the Commonwealth. If he has failed in justifying the application of the title of Comic to his work, he has reason to believe it will be found accurate. Though the style professes to be light, he would submit that truth does not necessarily make more impression by being conveyed through a heavy medium; and although facts may be playfully told, it is hoped that narrative in sport may be found to constitute history in earnest.

From the beginning of the second to the end of the Third Samnite War -- On the peaceful occupations of the Romans (from the scarcity of subject, necessarily a very short chapter) -- From the end of the Third Samnite War to the subjugation of all Italy by the Romans -- The First Punic War -- Some miscellaneous wars of Rome -- The Second Punic War -- Conclusion of the Second Punic War -- War with the Macedonians; Proclamation of the freedom of Greece by Flamnius; War with Antiochus; Death of Hannibal, and of Scipio Africanus -- Public amusements, morals, manners, customs, and state of the drama and literature among the Romans -- Wars against Perseus; The Third Punic War; Siege and destruction of Carthage, and ditto of Corinth -- Wars in Spain; Viriathus; Destruction of Numantia; The Servile War in Sicily; Appropriation of Pergamus --

The Gracchi and their mother; Rise and fall of Tiberius and Caius Gracchus -- The Jugurthine War; War against the Cimbri and Teutoni -- Mithridates, Sulla, Marius, Cinna, et cætera -- Death of Cinna; Return of Sulla to Rome; C. Papirius Carbo; Dictatorship of Sulla -- Re-action against the policy of Sulla; Services of Q. Sertorius; Metellus; Cn. Pompey; Spirited steps of Spartacus; The irate pirate -- The Third Mithridatic War; Deposition and death of Mithridates -- Conspiracy of Catiline; Introduction of Cicero; Cæsar, Pompey, Crassus, and co. -- Overthrow of Crassus; Defeat of Pompey; Dictatorship and death of Cæsar; End of the Roman Republic