Cairo of today; a practical guide to Cairo and its environs 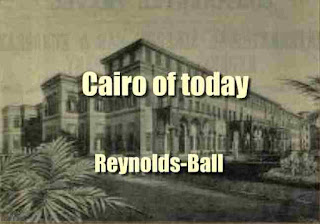 Cairo, in spite of the Europeanising tendencies of Mehemet Ali, and the innovations of Ismail in his attempt to give a Parisian veneer to his oriental Capital still remains one of the most attractive cities in the East. It is, of course, inferior in worldwide interest to Jerusalem or even Rome or Athens, but if a plebiscite were taken among tourists of the dozen most interesting cities in the world, Cairo would undoubtedly find a place in the list.
Cairo, dating only from the tenth century, has of course no pretension to rank as an ancient historic capital, and its historic interest is purely Mediaeval and Saracenic. In short, the capital of Egypt, the cradle of the oldest civilization in the world and the fountain of European arts and sciences, is but a city of yesterday compared to Memphis, Heliopolis, Thebes, and other ancient cities of Egypt now buried under the desert sands, or the accumulation of the debris and rubbish of centuries.
But though historical students and erudite Egyptologists may consider Cairo a mere mushroom city, it is full of attractions for many tourists, who do not find it easy to resist the fascination of the picturesque oriental life in the native quarters.
Fortunately, the ' Haussmannizing ' of the Khedive Ismail's builders was mainly confined to the European quarter of the city and did not touch the region of the Bazaars, where it is still possible, when once the Mooski — no longer a purely oriental highway — is crossed, for the imaginative traveller to realise the dreams of the Arabian Nights of his childhood.
The artist, too, if he strikes out a line for himself, and ignores the hackneyed and limited itineraries of the interpreters and guides, will find Cairo full of the richest material for his sketchbook. Some portions of the chapters in Cairo of To-Day are reproduced by permission from my monograph, The City of the Caliphs (1 vol. 12s. 6d. nett), recently published by Messrs. Estes and Lauriat, Boston, Mass. I have also quoted largely from articles contributed to the North American Review, the Queen, and other periodicals.
the book details : Download 9.8 MB