The Bible and the East 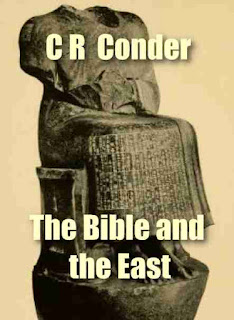 Never was the Bible more read or more earnestly studied than now; for — imperfect though they are — the means of understanding it daily become more and better. The same spirit of freedom and love of truth which led to its being rendered in the vulgar tongue, lead us still to claim to read and study its pages without limits set to the right of private judgment.
They are viewed from many standpoints by the student of natural science, literature, or of antiquities. These great departments of knowledge have been pursued their own sake, and by men who cared little as a rule for other sciences; and they have led to various conclusions which often are at discord. To understand the Bible aright, all of these must be taken into account. But if a private judgment has taken the place of authority in the study of the Bible, this is no less true of the study of science.
No dicta of even the greatest are to be accepted unless the reasoning on which they are founded proves to be sound. With improved data, we find such conclusions to be constantly liable to change — i$ science, literature, and archaeology alike.
The results of criticism have not always stood the test of examination in the light of monumental discovery, and history once discarded as fabulous has often proved to record actual facts. Contradictions that seemed clear have been shown to be due to a false assumption on the part of the student, and prejudice discovered where the impartial judgment was claimed.
Within the present century, we have witnessed not only the recovery of unhoped-for sources of knowledge, and the growth of sciences founded on the painful gathering of unknown facts, but revolutions not less remarkable in the principles on which studies of every kind are founded. Comparative examination of independent facts is now the basis of all true knowledge, and the comparison grows ever wider.
The slow growth of the future from the past is accepted as explaining all that has happened in our world, and the decay of all that once flourished is not less to be remembered in tracing history aright. In natural science the belief in a slow development of life on the planet, and in the great antiquity of man — historically speaking — is generally accepted.
In literature, the minute examination of language and historic statements have undermined many traditional beliefs. In the study of antiquity, the early civilisation of Asia has been proved to have been more perfect, and more widely spread, than scholars were willing once to believe. All these changes have affected our study of the Bible, and will yet more affect it in the future. But the Bible needs no apology, and its words are as deeply rooted in men's hearts today as ever they were in times of greater ignorance.
Neither science, literature nor oriental study can touch — or aim at touching — the teaching of love and truth in its pages.
The study of other Sacred Books of the East only serves to show us the greatness of the Bible compared with other books.
It is only the timid who fear the light poured on the Hebrew Scriptures by modern science or discovery; for while the honest student may be forced to give up much that he once believed, to own that tradition among Hebrew writers in time, as in other cases, sometimes overlaid the figures of great heroes with popular legend, and that they speak to us in the tongue of their own age, not in the language of today, — yet the honesty, the power, the genius, and the inspiration of prophets and psalmists in Israel are the more truly ac- knowledged the more freely their scrolls are studied and their statements examined.